The Complete List: Wineries I Visited at Taste Washington 2012 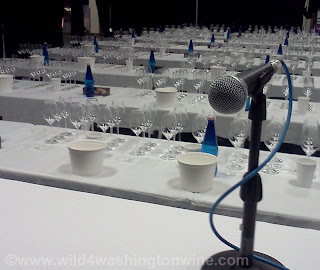 The quality was strong this year at Taste Washington. Which made it difficult at times to decide which wines were good and which were very good. Even so, I favored over half the wines I tasted this year. This is the list of the wineries I visited, my favorite wineries are noted as are my favorite wines.

I personally tasted 103 wines, and enjoyed every wine I sampled at Taste Washington 2012. However, of the 103 wines I tasted, there were 58 wines of exceptional quality and character, those are the wines on this list. The list is arranged alphabetically by winery name.

The wines on this list are my favorite wines at Taste Washington 2012.

* Favorites and homework wines, I suggest further research and tasting at home.
** Favorite of the favorites, best of the bunch, best expression of varietal/style.

28. Walter Clore Center Legends of Wine. Review posted.
Vertical Tasting 2004 – 2009, would have favorited, but these wines are not for sale.

For the first time, Taste Washington (Taste) was produced by Seattle's Convention and Visitors Bureau as a result of a new partnership with the Washington State Wine Commission. Some of the changes at this year's Taste? Taste was expanded to two days, wine seminars were held over the same two days as Taste at the CenturyLink Field Event Center. This change in venue made it easier for seminar attendees to visit with wineries afterward. Several of the wineries I spoke with appreciated having two days to visit with customers, trade and media. Taste seemed less frenetic to me this year and crowds more manageable.

Not only were wines poured at Taste Washington, but several Washington State Cideries were pouring apple cider too. Yes, Washington Cider! I'm quite excited to see quality cider being produced in Washington State. There is so much going on in the Washington cider industry, that it is deserving of a post and a couple more posts on individual Washington Cider companies. Really an interesting development, the quality is strong and the passion is there too. More to come.