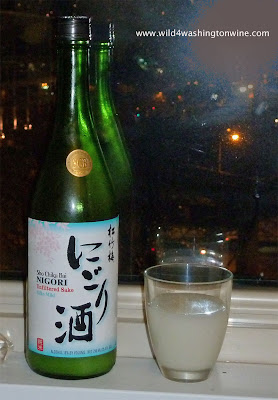 Last month in Seattle, I purchased a bottle of Nigori sake at Uwajimaya.

Uwajimaya is one of the largest Asian grocery retailers in the Pacific Northwest. I’ve been visiting Uwajimaya for almost 40 years. When I was much younger, I’d buy model ship and plane kits, Japanese comic books (manga) and I never left without at least one steaming Humbow in hand. Today I buy the manga for my son; while I still enjoy the tasty steamed Humbows, now I never leave without at least one bottle of Sake in hand. Uwajimaya has a terrific selection of imported sake.

This most recent visit, I left with a bottle of Sho Chiku Bai Nigori sake.

Nigori sake is generally the sweetest of all sakes, with a fruity nose and a mild flavor, making a great drink to complement spicy foods or as a dessert wine. Typical sake is usually filtered to remove grain solids left behind after the fermentation process; however Nigori sake remains unfiltered, resulting in a cloudier beverage. Before serving, the bottle must be shaken properly to mix the sediments with the sake, to obtain the full range of flavor and its "signature cloudy look". It should be served well-chilled.

I enjoyed this sake. Yes it was cloudy, a milky white color, which reminded me of coconut milk, and there was a lot of residue which adhered to the sides of my glass. It felt creamy in the mouth, sweet, but not too sweet and its flavor reminded me of a piña colada. I like piña coladas. This sake was a real treat.

For all you sake fans looking for something a bit different, I recommend this bottle of Sho Chiku Bai, NIGORI, Unfiltered Sake, 15% alcohol. When I bought it, it was on sale for about $9.