Northwest Wine Industry | The Next Phase | The Visionaries

"How are you going to standout? You must have a distinctive terroir. That's the story, it's about the place. It's not the producer." Steve Robertson, SJR Vineyards


The Vision for the Future of Northwest Wines

Last month I attended the 2018 Wine Bloggers Conference in Walla Walla, Washington. Wines were impressive as expected, and I was introduced to many talented winemakers. What I did not expect, was to have a new jolt of excitement for and about the future of Northwest wines. There are some cool things percolating inside of the Walla Walla Valley AVA.

Mentally, my thinking towards Washington wine is merging with thinking about Oregon wine. We share three AVA’s (Columbia Gorge, Columbia Valley and Walla Walla Valley), numerous vineyards, the Columbia River and many talented and passionate growers and makers. Last month, this view was re-enforced by Steve Robertson of SJR Vineyards and backed up by the team at Force Majeure Vineyards. They spoke of coming changes, challenges and a shared vision for Northwest wine. And a legacy for the future.


Steve Robertson of SJR Vineyards shared a great deal. What stuck out in my memory, was that he said, "I can't afford Napa. I can afford Walla Walla Valley." and "At 66 years old, this new project is not for me, I'm too old. It's a legacy I'm leaving for my daughter." Yes, instant like.


Next year, Force Majeure Vineyards will be breaking ground on one of the most exciting sites in the Northwest. It's called North Forks. I'm eager to share what I learned. And why I'm so excited about this site and a shared Northwest wine country.

Let's put winery growth in the Northwest in perspective.

When I have discussions with guests visiting Washington wine country, one of the points I like to deliver is that, "These are early days." The Washington wine industry is only just four decades old. And if I'm honest with myself, entered the world psyche barely a decade ago. Early days, with tremendous unrealized potential.


How do you stand out? Terroir!

Force Majeur owners are inspired by Hermitage and Côte-Rôtie, their goal is to create single vineyard wines, at the highest level of integrity to expressing vineyard site. No matter how difficult the terrain. This is a fairly new concept for the Northwest. We've had it rather easy.

While touring the Walla Walla Valley AVA with Force Majeure Vineyards, I began to realize they were taking the road less traveled. They are growing wine grapes in some of the most difficult terrain on Red Mountain and The Rocks District. They are obsessed with terroir. They are passionate about place. They are making truly stunning wines. And their obsession is not abated. They are taking things up a notch.


With a new winery under construction in the Walla Walla Valley (on the Oregon side), established vineyards in the Red Mountain AVA and their vineyard in the Rocks District, Force Majeure is soon to break ground on a new vineyard site in the hills of North Forks, east of Milton-Freewater, Oregon. This new vineyard site will be part of their triumvirate of terroir. 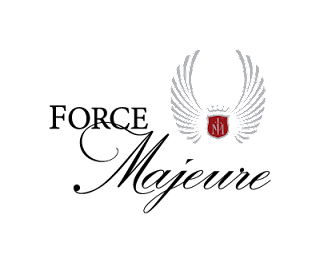 Their estate Red Mountain vineyard site is 40 acres, with 23 acres planted to vine. This is a unique site for Red Mountain, soil tests identified nine distinct soil types. From deep sandy, chalky calcium carbonate, limestone, rocky basalt and some volcanic ash and clay. With a 35% slope at this site, all work must be done by hand. Not easy, not mechanized. At around 3,200 Heat Units, think Southern Rhone. A unique site for Washington.

One of the reasons this vineyard is so interesting to to me, is that it is on the steep section of  the Red Mountain AVA, on a SW facing slope. No mechanical harvesting here. This is an ideal location for Rhone varieties: Syrah, Mourvedre and Grenache are planted. Think GSM.

They do have a limited production of Viognier from this site, at only 70 cases. The Viognier is used to some extent for a co-fermented Syrah. Because this location has such a steep hillside, the Syrah vines are Goblet trained (trained up a stick). The Force Majeure Goblet trained Syrah is the first planted this way in Washington. A high density planting at 3x4 spacing.

And they have bush vine Grenache too. Vines are grown closer to the ground. Tough work, because you have to bend over to manage and harvest this Grenache. Who does that? Force Majeure.

FYI: Planted in 2007, the first crop of Mourvedre was stolen. It was professionally picked at 1/2 acre of 3rd leaf Mourvedre. Additional bummer, it was not fully ripe. It was picked a week too early. This especially pissed off the vineyard manager.

Force Majeure is constructing their new production winery and tasting room in The Rocks District. A small Rocks District AVA vineyard was included with the purchase of this site.


Located in the outskirts of the formerly sleepy town of Milton-Freewater, Oregon, The Rocks District AVA is the second smallest AVA in Oregon, and smaller than any in Washington state. This place is distinctive to an extreme. Some have said that it is the most distinctive in the USA, and possibly the world. It's all about the place. And very limited availability, think Cayuse Vineyards. This region is just waking up to their potential as a significant player in the wine world.

"The boundaries of the Rocks District of Milton-Freewater are based on the geographical distribution of soils of the Freewater series, which are derived from the cobblestone-rich gravels deposited by the Walla Walla River. The cobblestones consist entirely of basalt, a dark-colored volcanic rock (that was) derived by erosion of the Blue Mountains."


The Rocks District AVA is only 3,750 acres in area, and so far, only 10% planted (338 acres today). Established in 2015, the AVA will have 500 acres planted within 3 years. I learned that more vineyards are going to be planted by California wineries, including Duckhorn Vineyards, and a Spanish winery will also be planting vineyards, Bodegas Valdemar from Rioja (the first international player). They are now on the world's radar.

This area is only beginning to see change, a lot more change is coming to the Milton-Freewater area. As I stated above, these are early days. Now is the time to invest. Interest is being driven by excitement over the quality of the Rocks District AVA. The wine world has noticed. So has Force Majeure.

The potential of North Forks was first recognized by Geologist Kevin Pogue.


Force Majeure believes in superior quality. They seek that quality among the best, and most challenging sites in Washington and Oregon. It should be no surprise they are going even further in that pursuit of quality. North Forks is the third special place in their triumvirate of terroir.

Last month, Force Majeure showed me the location for their next vineyards. Located east of Milton-Freewater, Oregon, I believe this will be the start of a new phase for the Northwest wine industry. I instantly thought of Priorat, and their rugged, steep vineyards. My heart soared at the rugged beauty of this location. What I wrote two years ago about Priorat, I believe will apply here too.


"I often say that the more the vines struggle the better the fruit. In Priorat I believe the same can be said for the people. Truly humbling physical effort is needed to tend these vineyards on slopes steeper than I could manage." Culture of Catalunya, July 2016

This place is different. Historically, Washington and Oregon wine growers have had it relatively easy. Many of the regions vineyards are planted on flat to gently sloped sites. Mechanical harvesting is common. There has been little need to plant on more rugged terrain. North Forks is rugged. All the vineyard work and harvest, will be by hand.

Force Majeures new vineyard site at North Forks, sits at an elevation of 2,000 ft. It's a cooler site than the lower valley. They compare the location with the Northern Rhone region of France. Heat Units are around 2,600 - 2,800 degrees. Not as hot in summer as Red Mountain. But a longer, more temperate growing location. The lower valley will freeze before this site does. Annual rainfall is about 25 inches, the owners think they may be able to dry farm some years. Irrigation water is available, and will be needed, because it is going to help establish the young vines. Planting should begin in spring 2019.

Soils here have more clay and higher PH than Red Mountain. Vineyards will not be planted in squares, vineyards will be a series of Arcs and Curves, based on soil types. A great deal of planning has gone on here. After their site analysis, they have mapped out 26 Micro Blocks, to 23 acres. Plantings will include different trellising methods, and clones. The goal is maximizing potential. It is expected that North Forks will go toe to toe with the best wines of the world. The owners excitement about the potential for North Forks certainly affected me. I now share a bit of that vision and excitement.

About half of the Force Majeure North Forks site will be developed to vineyards. The remainder will be hiking and walking trails and parks.

Todd Alexander, Force Majeure winemaker since 2014, came to the Northwest from Napa. Todd left Napa because he's excited about the unrealized potential in the Northwest. Todd will be ready to craft even more distinctive wines next year in the new Force Majeure production facility. This new production winery is being built just outside of Milton-Freewater, Oregon, in the Rocks District. Construction on the 12,000 square foot winery will be completed in 2019. Capacity will be up to 5,000 annual case production. I've sampled wines made by Todd, they are pure quality.

Force Majeure is going to stand out even more than they already do. Today, they are well known for making impressive red wines. I've been a fan since 2011. They will survive and thrive in an increasingly competitive environment, because of quality and the terroir of their estate vineyards. And they are intentionally leaving a legacy for their children.

The Northwest already recognizes that Red Mountain and The Rocks District are special places. The rest of the world is finally catching on. Add to that the new North Forks site, and I'm even more excited about the future of Northwest wine.

Northwest wine country is already a region of realized quality. Yet, it is full of potential expression, at a level the world will covet, of that relished taste of place. And in about ten years, some of us will be able to evaluate that new North Forks terroir. After the vineyards are established, mature and North Forks wine is finally in the bottle. I look forward to the realization of that next, tremendous phase.

Maybe I should rename this blog, Wild 4 Northwest Wine?