Part 5a - Mas LLunes 2013 Rhodes from DO Empordà, Catalunya: A Return Home 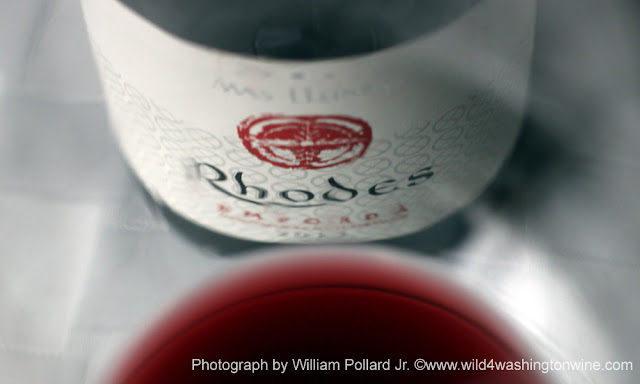 Vi Català. More than a review of the Mas LLunes 2013 Rhodes red wine.

I want to begin today's wine review with a much overdue re-cap of my visit to the Mas LLunes winery in 2016. There are more winery visits and reviews pending, which is why I have titled this post, "Part 5a". Wine review is further below.

* You can jump back to the original Outline if needed.

Note: Empordà is a Spanish Denominación de Origen (DO) for wines produced in the northeastern corner of Catalunya, in the province of Girona. Up until 2006, it was defined as DO Empordà-Costa Brava to associate the large tourist beach area within the region to the east.


On the Road to Mas LLunes Winery in DO Empordà

The drive to the Mas LLunes winery was full of narrow, shoulder-less, twisty back roads. Through some very beautiful country. Once the Pyrenees mountain range became visible, it served as the backdrop for our drive through wine country. Manel shared a lot of detail about the area and its history while driving. Making a great deal of eye contact and constantly expressing himself with his hands. I had a firm grip on the door handle for most of the drive.


Our destination was the most northern DO of Spain. This would be the closest I have ever been to France. By accident, we almost did go to France. There were so many circles, and so many special place names, that we ended up about 8 kilometers from the French border! Stop the car, plug in the GPS and we were on our way again to Mas LLUNES winery. The winery is just outside of the town of Garriguella and across the road from a wine cooperative.


As I mentioned, DO Empordà is the most northern DO in Spain. It is a windy area with maritime influence. The soils where we visited were slate and varied in color from orange to dark gray. DO Empordà is adjacent to and overlaps parts of DO Cava and DO Catalunya.


Manel and Crystal had an aggressively optimistic agenda. We were supposed to visit the wine cooperative across the street after lunch and visit a friend of Manel's in a nearby town and maybe drive up the coast. There was no way we could cram as many destinations into our day as planned. It became evident that I really needed another week to see everything they wanted to share. Yes, I must return.


We arrived at the winery at 1:30 PM and were graciously welcomed by the owner-winemaker, Antoni Roig. Antoni has been making wine for 19 years. Originally, a Mechanical engineer, he had a bright, friendly, open energy. I felt very comfortable and welcome.

Note: Crystal and Manel arranged our winery visit in advance. The Mas LLunes winery also called the Restaurant Battlle (details on lunch with photos), where we were going for lunch, to confirm that we would be there as well. If a bit late. Unexpected and very kind service.


Of course Manel translated for me, Antoni does not speak English and as I've mentioned before, my Spanish has not been used for 35 years. Antoni immediately offered to take us out to his vineyards, I was thrilled. Bouncing around in his 4 wheel drive rig, we drove along rocky, slate filled dirt roads.

Antoni showed us the younger vineyards first, with modern trellising systems: vines included Syrah, Cabernet Sauvignon and Merlot. The vineyards looked healthy and well cared for. Next we visited the Garnatxa Roja vineyard (Negra is red, Blanca is white and Roja is also a type of white, but with orange pink skin like a Pinot Gris).

Finally, we visited the old bush vines of 117 year old Garnatxa Negra and Samsó. These old vines were originally planted intermixed together. The thinking when these vines were planted was, clump varieties together, because they are all going to be used to make one wine. A blend of Grenache and Carignan

Note: Carignan/Cariñena appears to originate from Aragon. Today it is much more common in Catalunya, where it is known as Samsó. The old bush vines grown here can yield wines of true interest, even though blended, mainly with Garnacha.


Mas LLunes only uses grapes from its own estate vineyards. Most of the vineyards are at the foot of the Serra de L’Albera range of mountains, the easternmost range of the Pyrenees. It separates the plains of the Empordà and those of Roussillon.

The landscape was rugged and irregular, caressed by a strong north wind called the "Tramuntana" and a Mediterranean climate clearly present. I was thrilled to walk among these old vines, where the Ancient Greeks and Romans once tread. The place felt to me full of echoes of history, a true legacy.

*Rocky slate soil. There are occasional mounds of slate, this is where the extra rock was piled in zones were nothing would grow. Slate walls occasionally run along the path of the uneven dirt road. These stones were piled when workers had nothing else to do.

Antoni has a core group of eight workers who tend to the vineyards. Special crews are hired for harvest. The oldest vines are only tended by those who have the specialized training to manage and harvest this precious legacy. Not anyone is allowed to touch the old vines. I asked how long he expects the old vines to continue to produce, he said, "Hopefully until the young vines are at least as old."

When one of these old vines dies, the vineyard manager takes a vine from the next closest plant, they are clumped quite close to each other, and the vine is buried underground, where it will be trained to emerge in the place of the dead vine. However, if the parent vine dies, then so too will the sibling beside it. Interesting. My first time seeing this. Another first.

After a wonderful vineyard tour (see video above), we returned to the winery.


The winery was locked.

Remember, lunch is typically from 2 pm - 4 pm . Since it was now after 2 pm and lunch time, the winery was locked and everyone had left. Antoni found the key and let us in and offered a personal tour of his winery.

When I visit the production area of a winery, I am always looking at how well the winery is maintained. Because cleanliness is critical to quality. The Mas LLunes production area was very clean. They own a well equipped bottling line. Annual production is around 8,000 - 9,000 cases. Some of the wine produced is made for other customers and other labels. Which helps pay the bills. We then went downstairs to the cellar.


The Mas LLunes cellar is a very nice, deep, dark place. So comfortably cool after the heat and humidity outside. The cellar has more than 200 French oak barrels. Barrels in front for the aging reds, barrels against the back wall for the aging dessert wines. Antoni also makes a Solera dessert wine, which was not in US distribution. He gifted me a bottle which I plan on reviewing soon. It was fantastic, even my teetotaler sister-in-law liked it!

The first wine was a young white, the Maragda. Fresh and crisp, a blend of Garnatxa Blanca and Macabeo. Well suited to seafood. It is distributed to the US, in a couple of states. The label design, green gems, reflected Emeralds, the stone of youth for a young drinking wine. Cool design.

The next wine was a special white, the Singulares, Garnatxa Roja. It was aged in oak, bottled then held for another year in bottle before release. A heavier, more complex white. Interesting. Don't believe that one is in the US. It should be!

The Singulares label reflected the singular vintage, notice the orange stone on the label. The stone can change vintage to vintage, and the label will reflect this. A different stone will be orange from season to season, as the wine will be different year to year. Another cool design.


* Note: The winemaker stated that his wines are mostly consumed in Catalunya. He has sold to France and recently Germany. He has only had exposure to the US market for a few years. I hope we can give Mas LLunes winery better access to the US market. Loved his wines so much. It is with hope that more are imported to the USA. 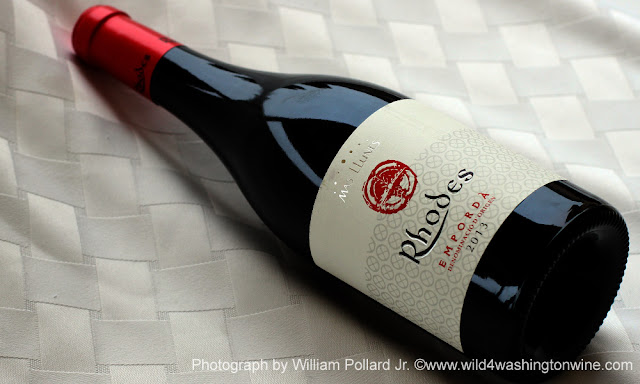 What does Mas mean? It refers to a farm or farmhouse, made of local materials. Often, it indicates a location associated with the Roman occupation from around 2,000 years ago.

What does Rhodes mean? It refers to the Greek "City of Roses" founded around the 8th century BC along the northeastern coast of Catalonia. The archaeological site is not far from Mas LLunes winery.

What does Empordà mean? Ampurias, also known as Empúries (Greek: Ἐμπόριον, Catalan: Empúries [əmˈpuɾiəs], Spanish: Ampurias [amˈpuɾjas]), was a town on the Mediterranean coast of the Catalan comarca of Alt Empordà in Catalonia, Spain. It was founded in 575 BC by Greek colonists from Phocaea with the name of Ἐμπόριον (Emporion, meaning "trading place", cf. emporion). It was later occupied by the Romans (Latin: Emporiæ), but in the Early Middle Ages, when its exposed coastal position left it open to marauders, the town was abandoned. source:wikipedia

After one hour: Wildly aromatic! Could smell the wine 2 feet away, earthier, with minerality and perfumed cherry. A supple mouth feel, very dry on the cheeks, with racy acid backbone, bright cherry, subtle earthiness, hint of orange peel, with cola into medium finish. Made for food. Cheese plate and charcuterie with bread, and olive oil for a true feast.


During #winechat. I opened this bottle to enjoy during a #winechat social media tasting. It had been open two hours. What I noted was, enjoyable with Manchego cheese. An aged goat cheese worked too. But the Italian balsamic cheese was the best - a wonderful medley of flavors. Most certainly a wonderful food wine and a perfect pairing.


Day two: The smell of Catalan wine, Vi Català, so captivating. Firm feeling in the mouth, a combination of tannin and acid, appealing fresh quality, with a touch of smokiness, savory cherry leaning into cherry-cream, hint of integrated earth, medium body, medium finish.


Thoughts: We don’t make wines like this in Washington state. Fruit from those old Samsó bush vines added depth. Easy drinking wine, perfect for food. Matched the spicy shredded chicken I cooked. My speed. Saddened to see this bottle empty. Guess I have to return to Catalunya. Who wants to go?
Strongly Recommended!

Note: I met Antoni's daughter Gemma in Seattle last year at a Catalan wine tasting. She was a perfect host, friendly, focused and welcoming, just like her father. Her English was perfect. A pleasure to meet you Gemma. And many thanks to Antoni for being a wonderful host and guide.

Now to make more time to write about more Catalan wines and wine country. And that Solera.