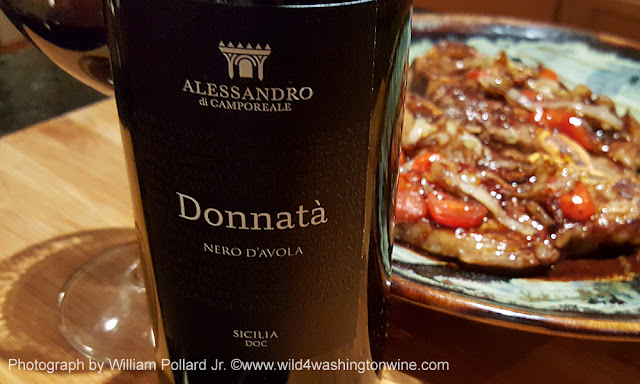 One of my most successful wine and food pairings.

In the classic technique of wine evaluation, the wine stands alone. Aroma, flavor, color, it is about what is in the bottle, then the glass and how you perceive it in the mouth. One then uses experience, knowledge and bias in making suggestions about quality of the wine, expected life of the wine and possible pairings with food. One does not always have the opportunity to put to the test the suggestions and recommendations.

Today, I am eager to share not only my tasting notes on the 2014 Donnata’ Nero D’Avola Alessandro di Camporeale Sicilia DOC, but my successful pairing of this wine with dinner. It was bloody marvelous. My enthusiasm for this wine, which woke me up at 5am this morning, is predicated on how well the wine matched the food I prepared for dinner.

It is not often I have a success of this magnitude. Reactions to my instagram posts before and during dinner, were also enthusiastic. Looks like the wine and food photos resonated with people around the world.

Following are my tasting notes for the wine, then a description of the food pairing, along with recipe and finally, information and resources about Nero D'Avola and Sicily/Sicilia. You can call me a fan of Alessandro di Camporeale. 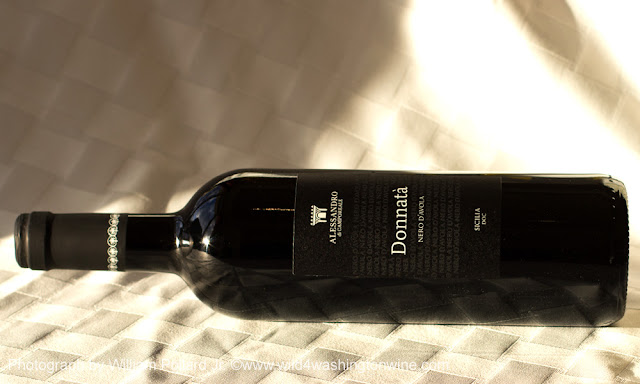 After 30 minutes: More fruit on the nose, plum with sour cherry, licorice, leather, hint of mint. Touch more weight in the mouth, dried cherry, tobacco, pleasant tannin on tongue and under lips, brightness on the light finish with that orange note, more my speed. That orange note lingered. Like.

Decanted 1 hour: Funk on the nose, with tarragon, dried raspberry and grape. Broader and softer on the palate, good mouth feel, dried cherry, raspberry, chicory, fine tannin, some sour cherry and cola into the dry finish with that orange peel note. More integrated, drier, still a light bodied, dry wine, but a pretty, if subtle finish. Delicate wine and should be paired with food that won’t overwhelm. Like.

At 380 meters above sea level, on a land rich in clay, limestone and potassium, are the thriving Nero d’Avola vineyards of the Alessandro family. The vines were established in 2000 using an espalier training system.

The Alessandro family’s roots are very old, steeped in history. With three brothers’ commitment and energy, Rosolino, Antonino and Natale, supported by their children Anna, Benedetto and Benedetto. You can call me a fan of the wines of Alessandro di Camporeale. Bravo! 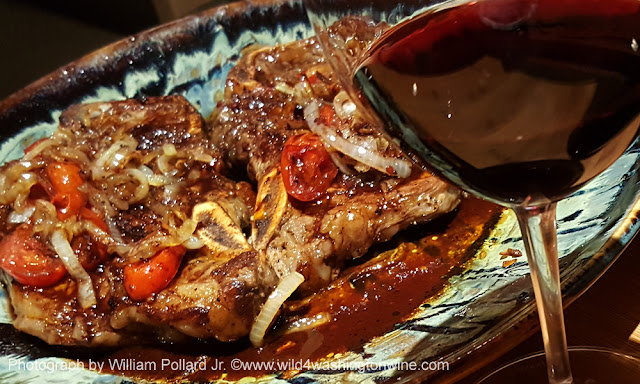 The hour I spent tasting and taking notes on the 2014 Donnata’ Nero D’Avola Alessandro di Camporeale Sicilia DOC, was just before I was to prepare dinner. I knew I was going to cook NY steaks. I knew it was too cold outside to grill. And I was appropriately hungry.

Initially, the wine underwhelmed. As the wine opened, especially the wine I decanted for an hour, it began to show some delicate and integrated flavors, it was quite pretty. My impressions of this Nero D'Avola affected my food preparation decisions. Dinner was executed by experience, though a bit instinctual and relied on ingredients at hand. Yes, it was strongly influenced by the wine.

3. Tomatoes - Cherry tomatoes were on hand, I rinsed a handful and sliced them in half. While the steak was sizzling on the flip side, I added the tomatoes to the frying pan. Sizzle!

After four minutes gently shake the pan. Wait 2 minutes and check steak. You may need to flip again if steak is not cooked to your satisfaction. I prefer my steak lightly pink and juicy.

5. Reduction Sauce - Marry the food to the wine.

This summer in Priorat I had an amazing lunch with family in the town of Falset. Chef Toni Bru, owner of El Celler de l'Aspic Restaurant, impressed me with his personalized dishes. It was a revelation and inspiration. An inspiration which emerged with this wine and food.

"Toni Bru selected our wines for us, and he married the cheeks with the red wine we were drinking. It was a decadent reduction sauce. I can only dream of making food this good."
Cuisine of Catalunya a Return Home, July 21, 2016

Remembering that fabulous meal in Catalunya from the summer, I took the still hot frying pan with bits of steak, tomato and oil, and added some of the Nero D'Avola to the pan. Reduced the heat to medium-low and worked the wine around, gently loosening the bits of cooked food stuck to the pan surface.

Gently reduce the wine into sauce - The wine should reduce by at least half in volume. It will develop a dark color and a wonderful sheen. Taste the sauce, it should not taste of alcohol. When it tastes correct, as in delicious, remove from heat and pour over the two steaks you have kept warm in the oven. 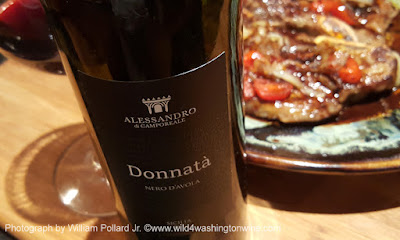 As I mentioned, this was a fantastic pairing with NY steak, caramelized onions, sauteed cherry tomatoes and a reduction sauce made with the Nero D’Avola. The tomatoes shined with the tender steak and wine, the sauce was rich and savory. By the time I plated dinner, the wine had been open two hours and matched beautifully. 12 hours later I am sitting at my laptop writing about this unforgettable, most wonderful wine and food pairing.

Such a satisfying dinner. Thank you, thank you Alessandro di Camporeale.

Nero D'Avola is Sicily’s ubiquitous grape variety. It grows on the island with so many biotypes, versions, features and interpretations, that it is difficult to define a single profile. This is Sicily's most prodigious variety, and deserves attention as a central figure from Sicilian culture. Sicily has been luring visitors since the times of the Phoenicians, Carthaginians, Romans and Greeks. A land prized by many ancient cultures.

Modern Sicilian wines showcase Nero d’Avola as one of the Mediterranean’s most regal red wines, balancing freshness with the capacity to evolve over time. Nero d’Avola’s adaptability to unique geological variations makes the grape one of the island’s most versatile.

Sicily’s reputation as a food and wine destination has remained intact for more than 3,000 years. Beginning with the Greeks, who arrived on the eastern part of Sicily in the 8th century BCE, the idea of methodical grape growing practices for the purpose of quality winemaking firmly took root on the island.

As the centuries passed, Phoenicians and Romans traded Sicilian wines based on their power and their distinctive qualities. The best vines were propagated, viticulture developed, and thus Sicilian wines were promoted on and off the island. Today, we see the fruits of these labors.

Though many things have changed, most of Sicily’s indigenous grape varieties and time-honored wine growing traditions continue to play an important role. Thanks to meticulous vineyard tending and gentle grape handling in Sicily’s wineries, Sicilia DOC wines feature the medley of flavors that Sicily has been known for since ancient times and which represent some of the best wines of Italy.

With more than 250,000 acres planted to indigenous and international grape varieties, each vintage in Sicily produces an array of captivating and elegant wines. Sicilia DOC wines are now available in the U.S. market. This wine region is re-estabishing itself and invites you to try their wines.

Sicily is the largest of the Italian islands, separated from the Continent by the Strait of Messina and surrounded by the Ionian, the Tyrrhenian and the Mediterranean Seas. There are many wonderful reasons to visit Sicily, and not just for the wonderful wines and cuisine. Bicycle touring has become very common in Sicily with numerous trails and terrains. I can't help but imagine Don Matteo from the Italian TV series of the same name, in his black cassock on his bicycle, peddling along the islands coastline.

With more than 20 mountains and ranges, rock climbing and hiking have also become popular in Trapani, Palermo, Messina, Pantalica and in Siracusa province. And Sicily is an island, so sailing, kite-surfing, kayaking, snorkeling and scuba diving are readily available around the island and the outlying archipelagos.  Sicily also boasts diverse golf courses, a favorite destination to combine the pleasure of sport, relaxation and fine wines and cuisine.

* Note: Sicily is the host of several UNESCO World Heritage Sites, including the archaeological area around Agrigento; Villa Romana del Casale (between Enna and Ragusa); the Aeolian archipelago (to the north of the big island); the baroque cities of Val di Noto; Siracusa; and the volcano Mount Etna.

Unique among Sicily’s UNESCO sites is the island of Pantelleria, to Sicily’s south. Pantelleria was added to the UNESCO heritage list in 2014 for its traditional head-trained grapevines of Zibibbo. The traditional techniques of Pantelleria’s vine training are celebrated each year, between the months of July and September, during festivals that honor the history of the island’s vineyard practices and the annual harvest.

Conversations with my wine industry friends has reinforced my efforts to avoid "house palate" and to remain open to wines from around the world. Perspective is important and I enjoy stretching my nose and palate. This was a decidedly remarkable, unexpected and successful wine and food pairing I won't forget. Sicilia has moved to the top of my must visit list. 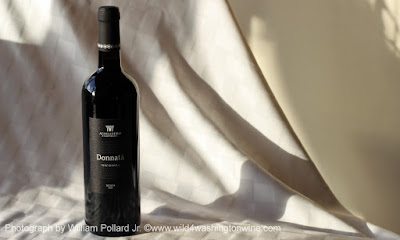 Today, Nero D’Avola is the signature wine of Sicily and it pairs well with local Sicilian cuisine. As I discovered, it can also pair extremely well with food I prepare at home. Look for the Sicilia DOC label to enjoy an authentic taste of Sicily at your home. Especially look for wines by Alessandro di Camporeale.