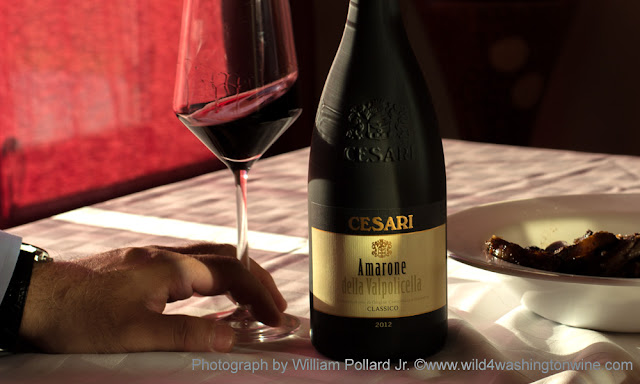 You will find I am always open to learning more about wine. Often when I am hand-selling wine, I will describe the wine by referring to its style, characteristics and the grape varieties country of origin. I firmly believe it is important to know wine in context. There is a world of wine waiting to be discovered, experienced, tasted and paired with food.

It has been my sincere pleasure to learn about Amarone from the Valpolicella region of Verona, Italy.

Amarone wines are made in a style different than any other wine in the world. They are truly special in their expression of flavor. The Cesari estate produces three versions of Amarone. The Amarone Classico is Cesari’s most affordable and approachable Amarone.

Today I had the pleasure of speaking with  Mario Menozzi of Gerardo Cesari S.P.A. (Cesari) Cavaion Veronese, Italy. We discussed food pairing, the Verona countryside, harvest, climate change, wine glasses, cellaring and music. Before I go into my tasting notes and wine review, I'd like to share part of our conversation.

Mario has 20 years experience working for Cesari. Though Cesari Amarone has a long and successful relationship in the US, those new to Amarone may not understand how special a wine. I will attempt to elucidate.

Cesari has been well received in the United States since it was first introduced in 1972 with the 1971 vintage. The quality of Amarone is always strong and has enjoyed success because of this quality. Let's look at the information I have gleaned and the fine details Mario shared with me.

Grapes for Amarone are hand harvested, but they are not immediately crushed. Instead, the grapes are gently dried for several months and then pressed after they have lost about 40% of their water (think almost raisins). This is a process called "appassimento" and is a traditional method dating back to the Roman era for making "Recioto" a sweet wine.

Amarone is not sweet, it is a dry red wine. In Italian "Amaro" is the word for bitter.


After harvest, grapes must be air-dried to achieve a minimum potential alcohol level of 14% and cannot usually be vinified until December 1 (many producers wait until January or February).

Mario explained that 100 kilos of grapes, in traditional wine making, would usually make 70 liters of wine. But with the appassimento process, 100 kilos of grapes makes 40 liters of wine. You have some loss because of the drying process, but the effort concentrates the flavors of the grapes. No other wine is made this way. The decision of when to begin the fermentation process is more instinctual, and less scientific, it will vary season to season. This adds to the "Artisinal" aspect of Amarone.

Amarone wines also spend 3 to 4 years aging in barrels and bottles before release. The 2012 Cesari Amarone Classico I am reviewing today is the current vintage. They also age quite well. Amarone is a modern wine with ancient traditions.

A changing climate has pushed harvest forward. Historically, harvest began in early October. Today, harvest begins in the second week of September. The warmer weather is also pushing up the alcohol in the wine.

There has also been a change to the blend of modern Amarone wines. Since 2010 the Molinara grape is no longer allowed in a Cesari DOCG Valpolicella wine. Molinara had issues with weak tannin and propensity to oxidation, it did not dry well either.

Today Cesari uses the Corvina and Rondinella grapes exclusively. The Amarone Classico I am reviewing is composed of 75% Corvina and 25% Rondinella. Most of the Cesari vineyards are 27 and 28 years old.

The Valpolicella region of Verona is hillside country. It is very green with vineyards everywhere and many fruit trees. The small hills go from 200 meters up to 600 meters, they are the highest mountains of the Prealps. On a clear day you can see the Alps from Verona. You will see the typical small Italian villages, the buildings are very old. This region is rich in history and full of interesting architectural structures, from the Romantic to the National style. There is over 2000 years of historical architecture.


Valpolicella is close to Lake Garda, the biggest lake of Italy. Wine has been made in this region since Roman times. Though it is a cold area, the lake moderates the temperature and winters are typically mild. Located in north-central Italy, Milan is to its west, with Verona and Venice to its east. This is a popular place for general tourism, and wine tourism. Milan is about a 1.2 hour drive away, where you can find some of the best fashion shopping available. Wine, food and fashion!

Amarone della Valpolicella received its DOCG status in 2009. Before it was only a DOC. DOCG in Italy is the highest classification that can be achieved and its wines held to the strictest standards of quality and guaranteed authenticity. With DOC, the rules governing quality and authenticity are a little more generous than those for DOCG.

The Veneto region produces almost 19% of all the wine produced in Italy.

Mario's favorite vintages are from the Cesari Bosan - a single vineyard bottling - 2000 and 2001. Which he described, 2000 and 2001 vintages, as "Excellent vintages in terms of complexity." With an, "Amazing elegance, think the best, maximum expression." And the, "Idea of Aristocratic complexity." A very elegant wine.
At last tasting, Mario said that the Cesari Amarone 1990 is still drinking well with a freshness still evident, even with its age. A fond memory.

At home I had a very successful pairing with braised Flanken short ribs, recipe below. But I was curious which foods Mario would recommend. He stated that the easiest way to match the Cesari Amarone Classico was with strong cheese, especially Pecorino and Gorgonzola. He suggested truffles would be fine as well and that for pasta, use a robust sauce, also with truffle.

Other pairings would be braised beef, tripe, wild game, pigeon, duck breast and foie gras. He personally prefers wild boar. Amarone is also excellent with venison which is a particularly tasty pairing. Savory foods truly match the powerful complexity of the Amarone.

Some of you may have expected me to ask about music. I did. My personal taste in music is all over the map. Literally. So, I asked Mario which music he enjoys listening to when he drinks his wines. His response echos my sentiments.

He loves music, many different styles of music. His musical preference will vary with his mood and the wine of the moment. Like me he is a fan of the Red Hot Chile Peppers and Classical music. His personal collection of music is important to him and quite large. It was too difficult for him to choose a style of music for this wine and musical pairing. He did mention that the last time he did enjoy Dave Mathews with the Amarone Classico. A wine and music pairing I can get behind. Because, I'm also a Dave Mathews fan!

Thank you Mario for sharing in conversation and wine. It was a sincere pleasure. 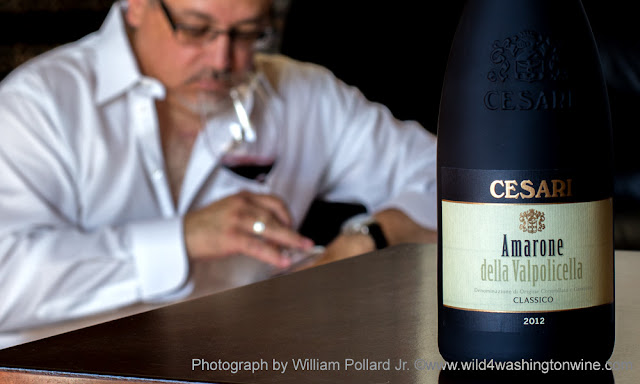 
My food pairing: I decided to cook braised Flanken short ribs to pair with this wine.The short ribs were even better on day two and a delicious match to the Cesari Amarone wine.

1. Flanken short ribs are thinly cut but long. I decided to cut each section of ribs into three smaller pieces for ease of braising. I used two packs of Flanken short ribs, about five sections per pack.
2. Pre-heat oven to 250 degrees Farenheit.
3. Braise cut up sections of short ribs in a large, deep lidded pan, with olive oil on medium heat. About 3 minutes per side.
4. Add salt, pepper, whole onion sliced, garlic to taste, a sprinkling of dried herbs (thyme, oregano, rosemary), 1/4 cup dry red wine (Amarone Classico of course will marry the wine to the food). Gently stir and cook until onion is transparent.
5. Cover the pan, bake in oven at 250 F. for 2 hours.
6. Remove pan from oven and drizzle balsamic vinegar over the meat, bake an additional 2 hours, then remove from oven.
7. Separate meat from juices, set aside the meat.
8. Make the sauce. Heat the juices on the stove top at medium-high, add 1/4 cup red wine. Once the liquid begins to bubble, reduce heat to simmer, and continue to simmer until about 1/2 of liquid has evaporated. Use a strainer to strain out the solid bits. Add clean juice back to the meat.
9. This dish is best on day two. If you can resist, let the meat and sauce cool to room temperature. Then refrigerate over night.
10. The next day you can remove the solid bits of fat (toss the fat) and then re-heat on the stove top. The meat will be very tender and tasty. Add a broiled tomato and garlic bread for dipping in sauce. Fantastic pairing with the Cesari Amarone.

Enjoy! I sure did. 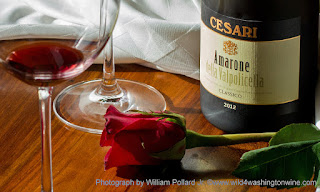 
Winery is open to the public 7 days a week. They can provide some food in the cellar, but there are many very good restaurants nearby or on the shores of Lake Garda.


* Final Note: The Garda Lake, which keeps the weather mild year-round, and the area’s excellent exposure to sunlight, allows Cesari to make olive oil and also Amarone Grappa, said to be of great softness and structure. Added to my list.

The context of wine is important to understanding wine. Here's to context.