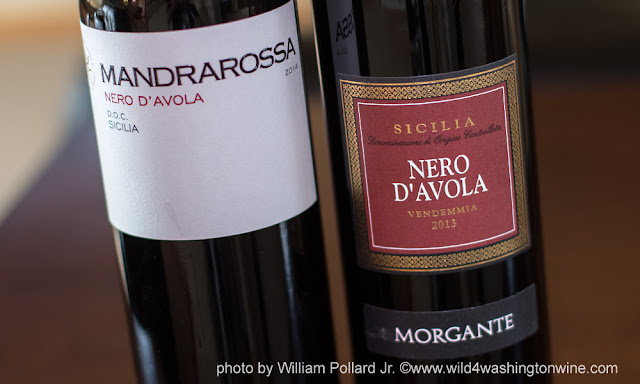 Enjoy These Two Wines from DOC Sicilia at Home.

Nero D'Avola is Sicily’s ubiquitous grape variety. It grows on the island with so many biotypes, versions, features and interpretations, that it is difficult to define a single profile. This is Sicily's most prodigious variety, and deserves attention as a central figure from Sicilian culture. Sicily has been luring visitors since the times of the Phoenicians, Carthaginians, Romans and Greeks. A land prized by many ancient cultures.

Today, Nero D’Avola is the signature wine of Sicily and it pairs well with local Sicilian cuisine. As I discovered at home, it also pairs well with a variety of American foods. Both of the Sicilian wines I am reviewing were delicious on their own and with food. It was a pleasure to learn more about the wines of DOC Sicilia. Always fun to try wines different from the wines I frequently drink.

See my tasting notes below, including my recommendations, suggested pairings, as well as further details on Nero D'Avola and Sicily. I was surprised and pleased by each of these wines. My research shows that while each of these wines are different in style from each other, they are classic expressions of Nero D'Avola.

Look for the Sicilia DOC label to enjoy an authentic taste of Sicily at your home. 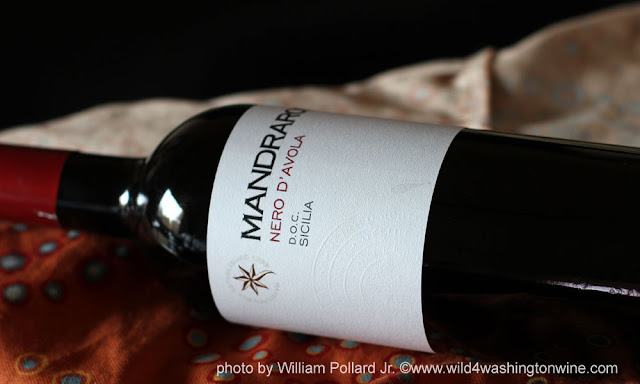 About: Located in the historic town of Menfi, in the southwest corner of this idyllic Mediterranean island, MandraRossa was guided into modern times by the “father” of contemporary Sicilian wine, Diego Planeta. Diego led the company for 38 years from 1973 to 2011. 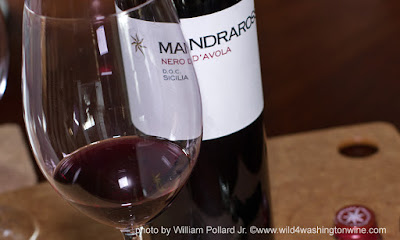 After 30 Minutes: Powdery perfumed nose, cherry to rose petal with graphite and bacon fat/body odor in the background. Dry with more grip on the gums and cheeks, pie cherry, cranberry, orange pith, custard, tannin more present, savory quality into the medium-light finish. Like. Turkey or duck would be perfect with this wine at this point.

Thoughts: The casual flavors, brightness and light body put me in mind of turkey, baked chicken and kababs. Also suitable for grilled salmon and pasta dishes. Surprised how well it paired with coleslaw and pickled cucumber on day one. Quite versatile food wine.
Recommended. 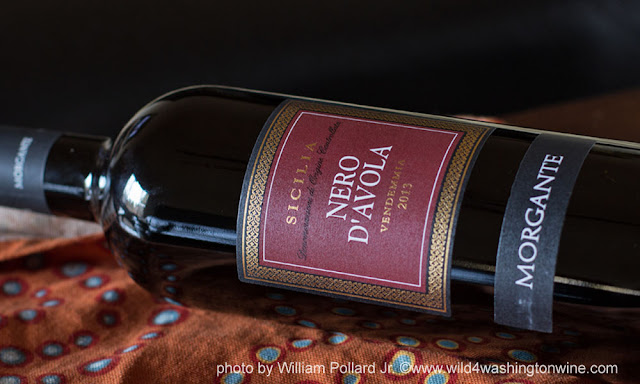 About: After accumulating generations of grape-growing expertise, the Morgante family started bottling their own wine under the guidance of Riccardo Cotarella in the mid-1990s. Situated in the western reaches of Sicily, where Nero D’Avola reaches optimal ripeness, Morgante has crafted this beautiful 100% estate-grown Nero D'Avola wine. 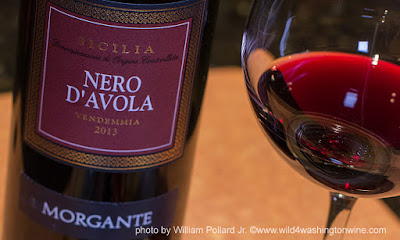 After One Hour: Plum and licorice with cherry undertones, dark, medium-long tarry finish. Quite dry. Seek some fatty foods for this wine.


Thoughts: Very cool wine. Dark and groovy. Yes, a big wine. Too big for smoked brisket...until I added the BBQ sauce… then POW, a most wonderful wine and food pairing. Drink alone or pair with hearty savory dishes.
Strongly Recommended.

The mission of Sicilia DOC is to unite passionate winemakers throughout the region and together raise awareness of Sicilian wines around the world.

Today, the “little black grape” has been uplifted further by a new generation of winemakers who are winning accolades for the wines’ elegance and drinkability. Nero D’Avola is a popular Sicilian grape.

Modern Sicilian wines showcase Nero d’Avola as one of the Mediterranean’s most regal red wines, balancing freshness with the capacity to evolve over time. Nero d’Avola’s adaptability to unique geological variations makes the grape one of the island’s most versatile.

1. In general, the wines are rich in red fruit aromas, particularly strawberry and sour cherry. Expect pleasant tannin and marked acidity for the wines produced on hilly, limestone-rich terrain.

2. Grown on clay and deep soils, Nero d’Avola will be more intense, with aromas of ripe cherry, rose, sweet spices, licorice and cocoa and a background of silky tannins. As a single-variety wine or as a blender for Frappato or international varieties, Nero d’Avola expresses the territory in which it is grown.

Sicily’s reputation as a food and wine destination has remained intact for more than 3,000 years. Beginning with the Greeks, who arrived on the eastern part of Sicily in the 8th century BCE, the idea of methodical grapegrowing practices for the purpose of quality winemaking firmly took root on the island.

As the centuries passed, Phoenicians and Romans traded Sicilian wines based on their power and their distinctive qualities. The best vines were propagated, viticulture developed, and thus Sicilian wines were promoted on and off the island. Today, we see the fruits of these labors.

Though many things have changed, most of Sicily’s indigenous grape varieties and time-honored winegrowing traditions continue to play an important role. Thanks to meticulous vineyard tending and gentle grape handling in Sicily’s wineries, Sicilia DOC wines feature the medley of flavors that Sicily has been known for since ancient times and which represent some of the best wines of Italy.

With more than 250,000 acres planted to indigenous and international grape varieties, each vintage in Sicily produces an array of captivating and elegant wines. Sicilia DOC wines are now available in the U.S. market. This wine region is re-estabishing itself and invites you to try their wines.

Sicily is the largest of the Italian islands, separated from the Continent by the Strait of Messina and surrounded by the Ionian, the Tyrrhenian and the Mediterranean Seas. There are many wonderful reasons to visit Sicily, and not just for the wonderful wines and cuisine. Bicycle touring has become very common in Sicily with numerous trails and terrains. I can't help but imagine Don Matteo in his black cassock on his bicycle, peddling along the islands coastline.

With more than 20 mountains and ranges, rock climbing and hiking have also become popular in Trapani, Palermo, Messina, Pantalica and in Siracusa province. And Sicily is an island, so sailing, kite-surfing, kayaking, snorkeling and scuba diving are readily available around the island and the outlying archipelagos.  Sicily also boasts diverse golf courses, a favorite destination to combine the pleasure of sport, relaxation and fine wines and cuisine.

* Note: Sicily is the host of several UNESCO World Heritage Sites, including the archaeological area around Agrigento; Villa Romana del Casale (between Enna and Ragusa); the Aeolian archipelago (to the north of the big island); the baroque cities of Val di Noto; Siracusa; and the volcano Mount Etna.

Unique among Sicily’s UNESCO sites is the island of Pantelleria, to Sicily’s south. Pantelleria was added to the UNESCO heritage list in 2014 for its traditional head-trained grapevines of Zibibbo. The traditional techniques of Pantelleria’s vine training are celebrated each year, between the months of July and September, during festivals that honor the history of the island’s vineyard practices and the annual harvest.


*Note: I accept most opportunities to stretch my palate and experience wines from outside of my home in Washington state. Conversations with my wine industry friends has reinforced my efforts to avoid "house palate" and to remain open to wines from around the world. Perspective is important and I enjoy stretching my nose and palate. Look forward to the occasional review of more wines, not from Washington.