A Visit with Dunham Cellars on the Eve of their 20th Anniversary, Walla Walla, Washington

“Eric wanted it, Michael made it happen, I supported it.” Joanne Dunham


Last week I visited Dunham Cellars in Walla Walla, Washington as they prepare to celebrate their 20th anniversary. They have earned many deserved accolades over the years, they have acted and remained true to their ideals and realized successful growth. In recent years the Dunham family has also experienced heart rending loss.

What makes for a great bottle of wine and successful winery?

While it is easy to see what is close and accessible, as in the obvious wine in bottle and glass, for they are of unmistakable quality at Dunham Cellars, what is not always apparent are the people who took the risk to found the winery, those who are present, those who are missed, those who now labor in the vineyards and tonight in the cellar. All of these people are part of the details and perspective essential to the creation of truly wonderful wines. And Dunham Cellars wines are truly wonderful. I have learned that much and more.

My visit this week to Dunham Cellars was emotionally tinged with atmospheric perspective. Even though some of the original color has faded with the loss of two of the founders, the edges remain sharply in focus and the brightness has increased with teamwork, talent and the pursuit of quality. Commendable on this Platinum anniversary.

The Founding of Dunham Cellars

Eric Dunham was the catalyst, he sought the help of his father Michael and stepmother Joanne to start Dunham Cellars. A Walla Walla native, Eric knew at an early age he wanted to make wine. After four years in the Navy, Eric attended Community College, not long after graduating he decided to learn how to make wine. He interned at Hogue Cellars for seven months and then became assistant winemaker for Marty Clubb at L'Ecole No. 41 winery for four years.

Dunham Cellars inaugural release was the Dunham 1995 Cabernet Sauvignon in 1997. Word got out and Dunham Cellars realized success and gradually increased production to meet demand. The growth of the winery eventually exceeded the artistic abilities of Eric. In 2008 Daniel Wampfler was hired as winemaker, allowing Eric to spend more time on the road marketing and selling Dunham Cellars. Eric maintained his influence in the wine making and assisted with blending decisions.

The original winery was started in a former WWII mechanics hanger, but today this space is re-purposed for relaxation and sipping wine. Decorated by Joanne Dunham, it is part art gallery with the feel of a city loft. Eric Dunhams original artwork hangs on the walls. Over-sized leather chairs encourage relaxed conversation. An appropriate space to share a delicious bottle of wine with good friends when celebrating 20 years of Dunham Cellars.

“The smell of fermentation is wonderful and touches something intrinsically human and primal.”


Dunham Cellars is composed of a talented, focused, driven team. Over the last 20 years they have systematically managed annual production from 200 cases to approximately 30,000 cases. The winery, once limited to a World War II era mechanics hangar, now spreads to three additional buildings. The barrel storage room feature solar tubes for additional lighting and Aerostat units for reducing potential contaminants as they break down viruses, molds, and even TCA.

Winemaker Daniel Wampfler impressed me with his attention to detail, use of appropriate modern wine making technology and cleanliness. With a self described controlling nature, I believe his character is reflected in the quality of Dunham Cellar wines. Deeply impressed. I thought I knew Dunham Cellars, it was obvious to me I had only gone surface deep. I await with anticipation the 2015 vintage.

Daniel and Joanne took me up the catwalk overlooking several 30,000 gallon fermentation tanks. One open tank was full of hand harvested and just sorted Lewis Vineyard Cabernet Sauvignon grapes, the other tank was full of fermenting Cabernet Sauvignon almost ready to be pumped into barrel – I wish you could smell the fermentation. For me, the smell of fermentation is wonderful and touches something intrinsically human and primal.


100% of the fruit is hand harvested, Dunham Cellars has never used machines to pick. Last year an Optical Sorter was added, which sorts grapes by shape, size and color – it rejects a significant amount of bad/damaged fruit, insects, leaves, etc. The resulting machine sorted fruit is so clean, it looks like a bin of blueberries. This piece of technology does the work of about 16 people and improves the quality of the wine.


Cleanliness is of utmost importance to wine making quality. Quality, Quality, Quality. Daniel blends his wines early on in the wine making process. For him, this allows the juice to “meld” and “unify” better than if the wines were blended just before bottling.


Daniel has also acquired a Concrete Egg which will be used for an Estate Chardonnay to be released next year. A well equipped in-house lab is used for the essential chemistry of wine making and next door their bottling line accommodates both cork and screw cap. They have invested wisely.

Dunham Cellars controls every facet of the process in their own vineyards via their farming services company – Appellation Management Group – they use their own crew to manage and sustainably farm 100 acres for themselves and for other wineries. Dunham Cellars makes all their wine on site. Total control emphasizing quality.

On the Loss of the Founders


This month is truly bittersweet as it marks both the 20th anniversary of the winery and the one year remembrance of Eric Dunhams suicide. With Eric’s own expressive artwork lining the walls of the winery, he and his fathers absence have added to the brightness and sharp edges that manifest Dunham Cellars. Their presence is still there and will continue to influence vintages to come.

The AIWF, which was founded by Julia Child, Robert Mondavi, and others, as a national 501-c-3 non-profit organization dedicated to advancing the understanding, appreciation and quality of wine and food. They are very passionate about helping to ensure that “quality of food and wine” is synonymous with “Washington State”. The AIWF scholarships are intended for Washington students to attend Washington schools.

Though 2011 was a cool year and the fruit a challenge to work with, the 2011 Cabernet Sauvignon is a favorite of both the winemaker and founder. They also like the 2012 vintage, which is riper, but shares a common thread of style. The 2015 harvest should be complete by the middle of October.


Winemakers are technical artists, they work diligently for years enhancing and tuning their skills, and like an artist they take satisfaction from those who enjoy and appreciate the literal fruit of their life labors. Which I did.

You can find Dunham Cellars wines around the Pacific Northwest, on the East Coast, in Japan, China, and Ontario, Canada, they are well represented. It is important to note that they release their wines when they are ready to drink. There is no reason to wait to drink Dunham Cellars once you purchase a bottle.

“What are you waiting for?” Daniel Wampfler, Winemaker Dunham Cellars


"It is extraordinary, unique and endearing, just like Mike and Eric." Joanne Dunham.


Three Legged Red $19 – Archetypal Dunham Cellars red blend. Big bang for the buck. Tasty. A user friendly wine, Wednesday burger/table wine. Port was Eric's loyal three legged dog. The bottle and label are a tribute to his memory. The three main legs of this wine were Cabernet Sauvignon, Syrah and Merlot. The current blend is composed of a bit of several different varieties. User friendliness is paramount in the delivery of this wine. It is in a lot of restaurants for glass pours. 100% hand harvested, 100% barrel matured, just for a shorter period of time. It is a softer, fleshier, rounder more approachable style of wine. Pop and pour.

Dunham Cellars makes only two blended wines, Three Legged Red and Trutina. All the other wines made by Dunham Cellars are 100%  of the variety. They may blend fruit from different vineyards and barrels, but they are true expressions of the varietal. They also enjoy aging in oak and in bottle. When you purchase a bottle of Dunham Cellars, the wine is ready to drink.


2012 Trutina $29 – A classic Eric Dunham influenced red blend. I Reviewed the 2011 Trutina in February 2015. "Trutina" is the Italian word for “balance” the name was selected by Michael Dunham. Trutina/3 Graces was going to be a separate label as it was the most expensive wine to produce. But people did not understand what it was. So they put it under the Dunham Trutina label instead. This is a Bordeaux style blend. Typically spends 18 months in barrel. Fun wine, because blending is fun for winemakers. The blend varies depending on the vintage.

Everything else is 100% varietal. No Syrah + Viognier co-ferment. Nope. Dan has fallen in love with this philosophy. It forces him to work with the varietal. He and his co-winemaker do the tasting, blending and make the decision which barrels for aging and what to bottle where. February, May and final blending in June. They blend earlier than most wineries. More challenging, but it allows the wine to marry, more integrated, more whole. It's a philosophy. Very French/Old World approach to making wine. A little luck involved too.


2012 Cabernet Sauvignon XVIII $45 – A contemplative and delicious wine. At 100% Cabernet Sauvignon, this is an iconic Dunham wine first made in 1995 and originally priced at $45. Today the price remains $45. Eric started numbering the 1995 vintage with Roman numeral 'I' (first release) and the winery has kept the system in place, increasing by 'I' each vintage. The 2012 vintage is XVIII. Yum and Yum.

Outside of the Pacific Northwest, Dunham also does well in NY, NJ, PA, TX and CA. Regions where they obviously appreciate good wine and have some wine culture. 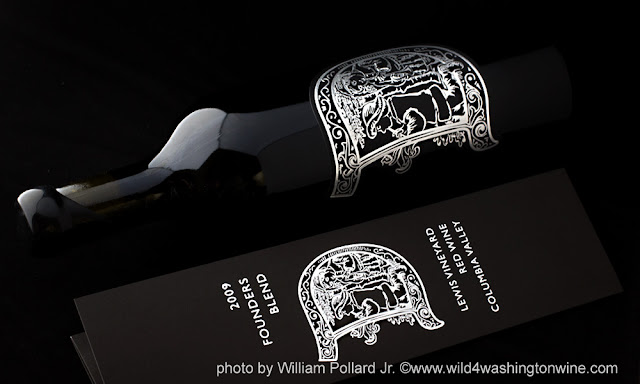 2009 Founders Blend, Lewis Vineyard $95 – An extremely special and limited production wine. This is the most important bottle at the winery. The Founders Blend was originally intended for Michael Dunham, but after re-grouping it is now dedicated to both Michael and Eric. For every bottle sold $10 goes to hospice. A complex and dark red wine. "It is extraordinary, unique and endearing, just like Mike and Eric." Joanne Dunham.
Blend: 65% Cabernet Sauvignon, 25% Merlot, 10% Syrah
Production: 200 cases. 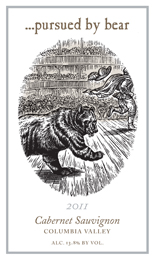 Dunham Cellars has an enduring collaboration and working friendship with actor Kyle MacLachlan of Twin Peaks and Blue Velvet fame. Eric Dunham met Kyle in an elevator and they struck up a friendship. The friendship continues with the family and is reflected in the “Pursued by Bear” wine series tailored to Kyle's style. Kyle is originally from Yakima, Washington and maintains his roots and friendships in Washington. He also has excellent taste in wine. He has become a part of Dunham Cellars. Joanne Dunham said, "Kyle is a really fun person to be with. Great guy. And he has wonderful hair."

My visit to Dunham Cellars on the eve of their 20th anniversary has left me with a deep appreciation for this Walla Walla winery and the people who call themselves Dunham Cellars. The founders are sorely missed, but their presence is felt and expressed in every bottle of Dunham Cellars wine.

I encourage you to take some bottles home to share with your friends and family. Set aside the time to enjoy and relax, there is no better time than now. What are you waiting for?