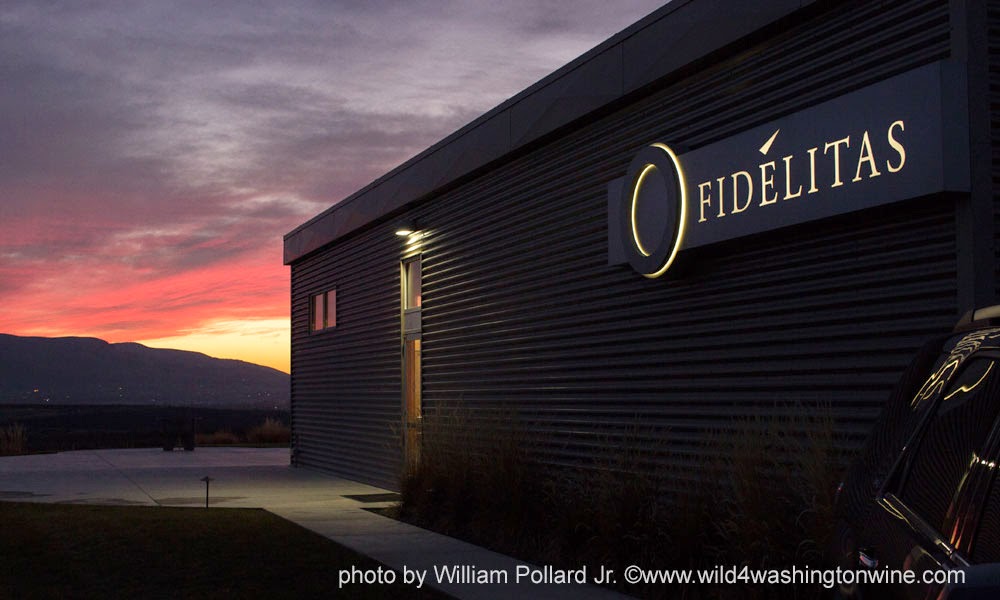 Taking my nose in for an alignment at Fidelitas.

Last night, Enologist and wine instructor Hillary Sjolund was at Fidelitas Winery on Red Mountain. She was leading a sensory session focusing on identifying aromas in wine. I arrived just as the sun set behind the Horse Heaven Hills.

A key part of describing wine is accurately describing what you smell. Taste and smell are inextricably intertwined. Accuracy of describing smells is important to the wine consumer, but critical to the wine professional. Ms. Sjolund lead us through a sensory exercise practiced by those studying wine.


I've practiced similar exercises in different environments focusing on smell and taste. At this session we focused only on smells/aromas. As Hillary emphasized, it is important to agree on descriptors. A common vocabulary is essential to those growing grapes and making wine. For someone writing about and describing wine, it is a practical and important exercise.

Smelling wine and describing aromas in wine, requires not only a good nose, but an ability to visualize and connect that smell with actual things like cherry, butter, toast, campfire, etc. There are aromas in white and red wines which are common to grape variety, oak program, winemaking technique, faults, flaws, region of the AVA and location in the world. Some smells are good, some not so much.


There are core aromas common to white wines and aromas common to red wines. These are part of the wine sensory standards. Hillary had 11 white wines and 11 red wines, each wine was flavored with ingredients found at the local grocer. We had to smell each wine and identify the dominant aroma we smelled. Which is more difficult than you may think. How did I do? I've highlighted in bold the properly identified aromas. Yep, about 50/50.

What's interesting about this exercise, after I knew what was in the wine, it was easy to identify the aromas I missed. The strawberry jam in the red wine I misidentified because I associated the smell with ice cream - I like to eat ice cream with strawberry jam! I'm usually good at identifying bell pepper in red wine, because it's a green/unripe aroma that stands out. Not last night. While I correctly identified Clove in the red wine, I did not in the white wine. Context is important, out of context is important too. Maybe a bit out of alignment.

Hillary mentioned that part of the problem identifying the red fruit aromas, was likely because the fruit is out of season, so not as aromatic. But still a good exercise because aromas vary in intensity.


This was a fun and instructive session. Hillary made the wine samples in the morning with little jars filled with inexpensive, low alcohol wine and ingredients purchased at the grocery store. An affordable way to make your own sensory kit at home.

Over time, I have found an approach for tasting, describing and reviewing wine which works best for me, my nose and mouth. One bottle of wine, by myself, in a quiet room. I've also learned that sometimes I can't properly taste or smell wine. I have off days. For me, this sensory session was like taking the car to the shop for an alignment. It was wandering a bit. My nose is perhaps better aligned today. I think I'll make my own wine sensory kit at home and test myself again. Hillary suggested to take it a step further, cover up what is in the container and identify the aromas without seeing the wine.


If you are not on the Fidelitas email list, or following them on facebook and twitter, I strongly recommend you do. They are known by me for offering exclusive wine tastings at their Red Mountain and Woodinville tasting rooms. Don't miss out on their next special tasting. That's how I found out.

Hillary Sjolund is the owner and winemaker for Sonoris Wines. A native of California, Hillary graduated with a degree in Fermentation Science from UC Davis and got her start in the wine industry as a harvest intern at Pine Ridge Winery in Napa. She spent time working harvest in Chile in 2003 and returned to Pine Ridge as assistant winemaker. Hillary moved to Washington State in 2006 and became winemaker for DiStefano Winery in Woodinville. In January, Hillary left DiStefano to focus full-time on her own Sonoris Wines. She purchased her first Cabernet Sauvignon grapes from Blue Mountain Vineyard in Walla Walla in 2008. From those grapes, she made her first Sonoris wine, “Burney’s Blend” named for her grandfather.

"Sonoris was created in honor of my parents and grandparents. Their unwavering strength, resilience, dedication, and love resonated within me, and have directed my passion in winemaking. The first label I created was of my Grandfather, Burney Sjolund. He started our family business on the Mendocino Coast of CA in 1945. He was without a doubt the most determined man I ever knew. Burney’s Blend was created as a reflection of that determination and entrepreneurial spirit. On Thursday December 11th, at the age of 99, he peacefully passed away. It is with great pride that I raise a glass of Burney’s Blend to celebrate a life well lived. Saluté Gramps!" Hillary Sjolund

Take a Class Taught by Hillary

As an instructor, Hillary also teaches enology classes via VESTA the Viticulture Enology Science and Technology Alliance. These are degree and certification programs offered online. VESTA is a National Science Foundation funded partnership between the Missouri State University system and colleges, universities, vineyards and wineries across the United States.

VESTA serves as a pathway for individuals interested in certificated training in viticulture, enology and wine business entrepreneurship.  In addition, students interested in progressing to an Associates Degree of Applied Science may utilize the courses of VESTA in conjunction with general education courses taken through an Alliance member institution or at a local college.