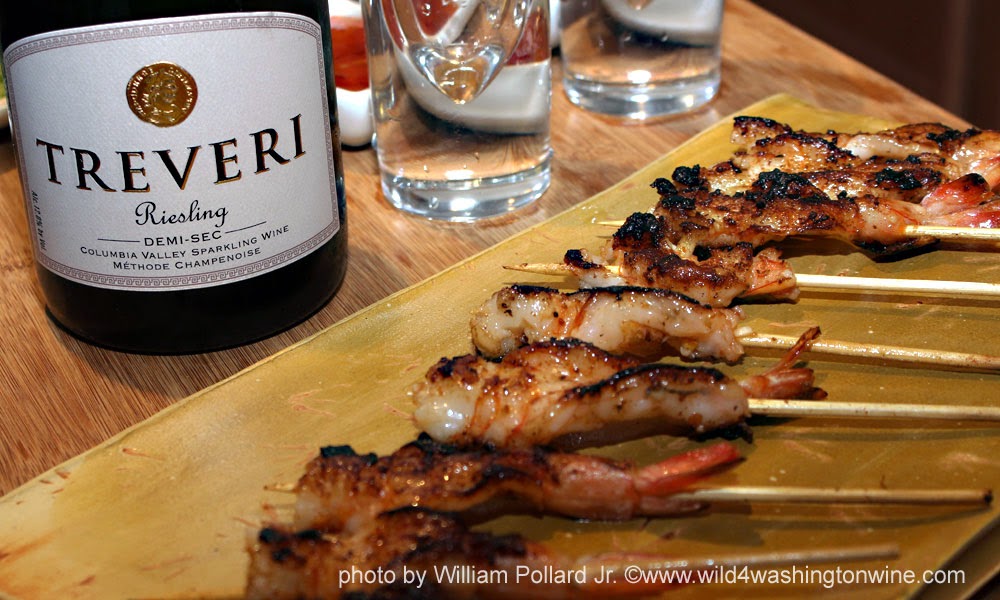 December is holiday festive party time! Our job this month is to create some great sparkling wine and appetizer pairings. If you see this early enough, please join us December 13th at 8 a.m. Pacific Time. We’ll be chatting on twitter using #WinePW about our creative holiday sparkling wine pairings.

We’d love to have you join us! Sparkling Wine and Appetizer Pairings.

This month I wanted to pair a Washington Sparkling wine with something I enjoy serving. I thought spicy prawns on a stick would be perfect. I chose wild shrimp for this recipe because they taste better. Thankfully, I found some medium sized wild shrimp which were perfect for an appetizer on a stick. Cooking time was minimal and could be done as guests arrive. If you don't like spicy you can omit or reduce the amount of chili used. Actually, I reduced the amount of chili for this recipe and I still sneezed like crazy when I was measuring it. The wine I chose was wonderful.

Once the pan was heated the shrimp did not take long to cook. They only needed about 2 minutes per side. I have a heavy lid for the pan I use, so I rested it on the shrimp to minimize oil splatters and to reduce cooking time. It worked well. I was able to fit about 12 skewered shrimp in the pan once the pan was hot. They cooked quickly.
Serving
Yes, the shrimp were spicy. My son thought they were too spicy alone. I didn't mind and thought they were a good match with the sweetness of the Treveri Sparkling Riesling.
I had sauces on the side for dipping, Sweet Chilli Sauce, Memmi (similar to soy sauce) and Mustard. They took some of the heat off of this appetizer and added variety to the taste.
Next time I think I will brush half of the shrimp with Sweet Chilli Sauce and the other half with Memmi or Soy Sauce before serving. That should reduce the heat and avoid needing a dipping sauce - because they would already have the sauce on them.
This would be a good dish for any festive celebration or with dinner of Soba noodles or rice. The Treveri Sparkling Riesling was fantastic of course. See my notes below on this sparkling wine.
I wanted to pair the Spicy Prawns with a friendly, slightly sweet wine. I chose one of my favorites, a Washington Sparkling Riesling by Treveri Cellars. 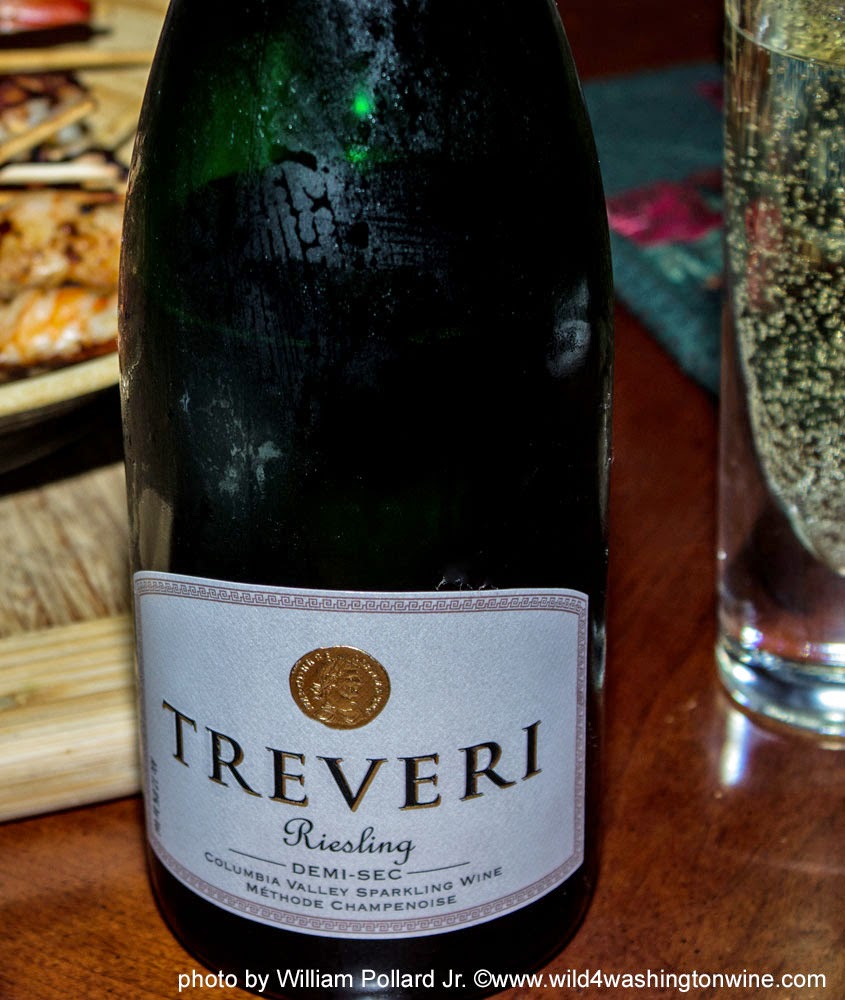 Treveri winemaker Juergen Grieb has a degree in winemaking and sparkling winemaking from Germany. From the town of Trier on the Mosel River next to Luxemburg, Juergen learned his craft at Kartheuserhof Winery under the tutelage of Herr Ludwig Breiling and worked with owner Christoph Tyrell. He also worked for the Duhr Sektkellerei in Trier which was a sparkling wine facility. After graduating, Juergen moved to the United States to make wine for an early German held winery on the Wahluke Slope in 1983. Juergen has worked in the Washington State wine industry since then, most recently for a bulk wine producer as the Head Winemaker producing 6 million gallons of still wine.


Treveri Cellars opened its doors on November 23, 2010 with a mission to put Washington sparkling wine on the map. Since its opening, Treveri wine has been served at White House State Department receptions and the James Beard Foundation in New York.

#WinePW 7 Ideas from our group for you.
Try something new this year!

Don't forget our Twitter chat December 13th at 8 a.m. Pacific Time. We'll be talking about our tips and tricks for the best holiday wine pairings. We'd love to have you join us!

And, be sure to mark your calendars for January's Wine Pairing Weekend, hosted by Christy at Confessions of a Culinary Diva. Join in the #WinePW 8 conversation on Saturday January 10, 2015.