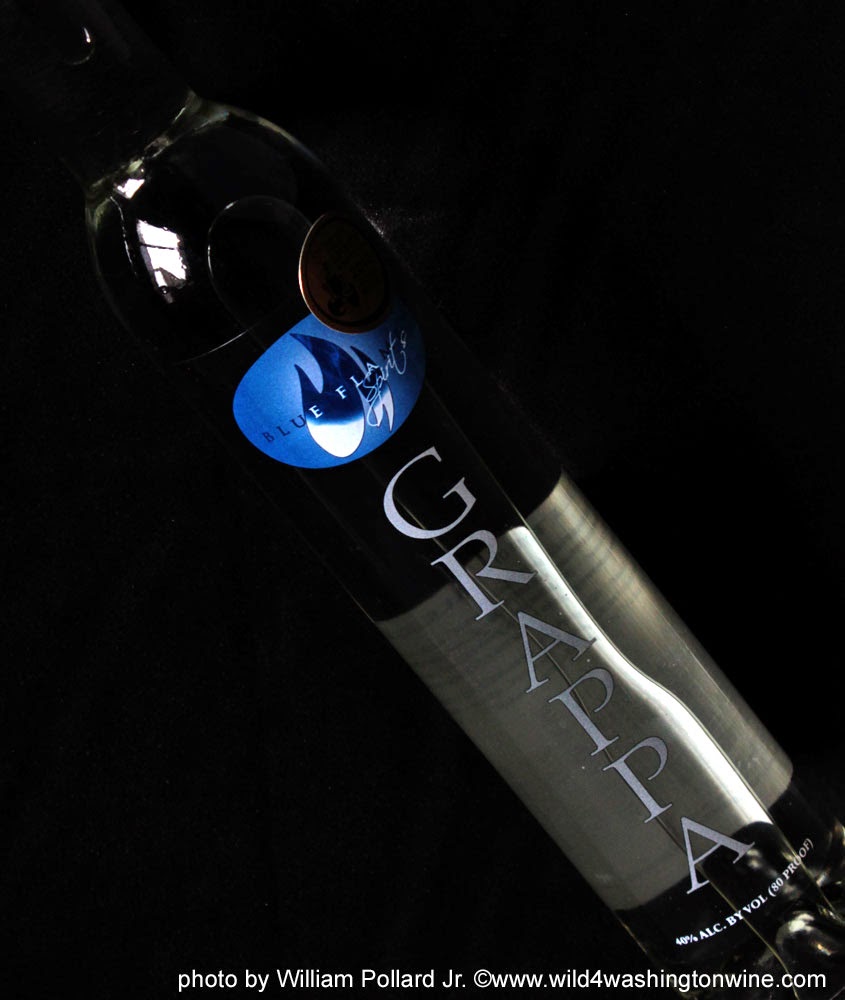 This weekend I was in Prosser, Washington at the annual Scottish Fest and Highlands Games. It seemed a larger more enthusiastic crowd this year. People were in a good mood and we enjoyed mingling with the Scots in kilts. Like last year, afterwards we wandered two buildings over to Kestrel Vintners and enjoyed premium Washington wine with a tasty and filling lunch.


Unlike last year, this year as we walked over to Kestrel I stopped at Blue Flame Spirits. Blue Flame Spirits is a Prosser distillery. They make Vodka, Gin, Wheat Whiskey, Rye Whiskey, Brandy and Grappa. I sampled their Vodka and Wheat Whiskey. As I was about to purchase a bottle of their Vodka, I saw bottles of Grappa against the wall. "Hold on. You have Grappa too?"


Owner and distiller Brian Morton was pouring for me. He's a friendly guy with a big smile and warm personality. Our conversation shifted gears as I acknowledged my interest and limited Grappa experience. He said, "If you know what Grappa is, then you have to try it." Smile on my face as he opened a bottle and poured me a taste.

Last year in Penticton, British Columbia I was at an after party with an assortment of wine personalities. The room was filled with an even greater assortment of beverages. One of the bottles which caught my attention was a bottle of Italian Grappa. Yank. That was my first Grappa experience. It was rough. Grappa is an acquired taste. My first impression was "kerosene" with a "lighter fluid" aftertaste. Now one might think that an impression that strong would discourage me from trying Grappa a second time. Wrong. The next night there was another after party in the same place. Sitting alone, ignored by an even larger crowd was that same bottle of Grappa. Yes, I went back for more Grappa. Either that bottle had opened up in 24 hours or my palate was in a state of shock or maybe, maybe I was acquiring a taste for Grappa. It was better the next night. I enjoyed sipping Grappa that night. 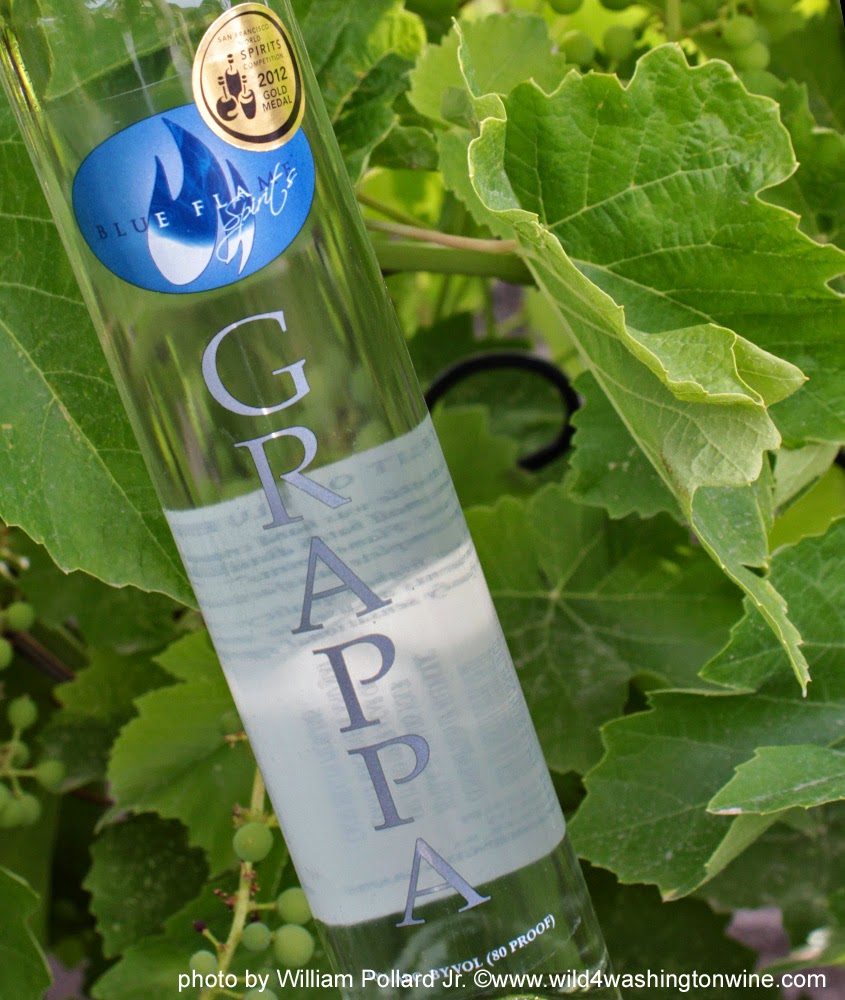 Grappa is made from pomace. It is made by distilling the skins, pulp, seeds, and stems (i.e., the pomace) left over from winemaking after pressing the grapes. It was originally made to prevent waste by using these leftovers. It's a fragrant, grape-based pomace brandy of Italian origin. Grappa started being distilled about 400 years ago, once water began to be used as a coolant during the distillation process.

"Grappa is traditionally served at a cool temperature, with many people erring on the side of serving it too cold, because it can always be warmed with the hands until it releases its rich aroma. Typically, it is offered in a tulip shaped glass, and it may be drunk alone, or consumed with fruits, cheeses, and desserts. This beverage is typically served after a meal as a digestivo, in Italian parlance." Source: wiseGEEK

Grappa is not for everyone. It has a definite edge and rough quality. When I drink Grappa, I think of manly men hanging outside by a fire, after dinner, slinging back shots of Grappa while talking smack about conquests and adventures. It is not a dainty drink. You drink it straight. The Blue Flame Spirits version of Grappa, while still a bit edgy, was worlds smoother and more sophisticated than the Grappa I was introduced to last year. It lacks that heavy Kerosene quality.

Comment: It's not traditional, but I tried this Grappa on the rocks and liked it. It smoothed out the intense alcohol and emphasized an anise flavor I enjoyed. Recommended. 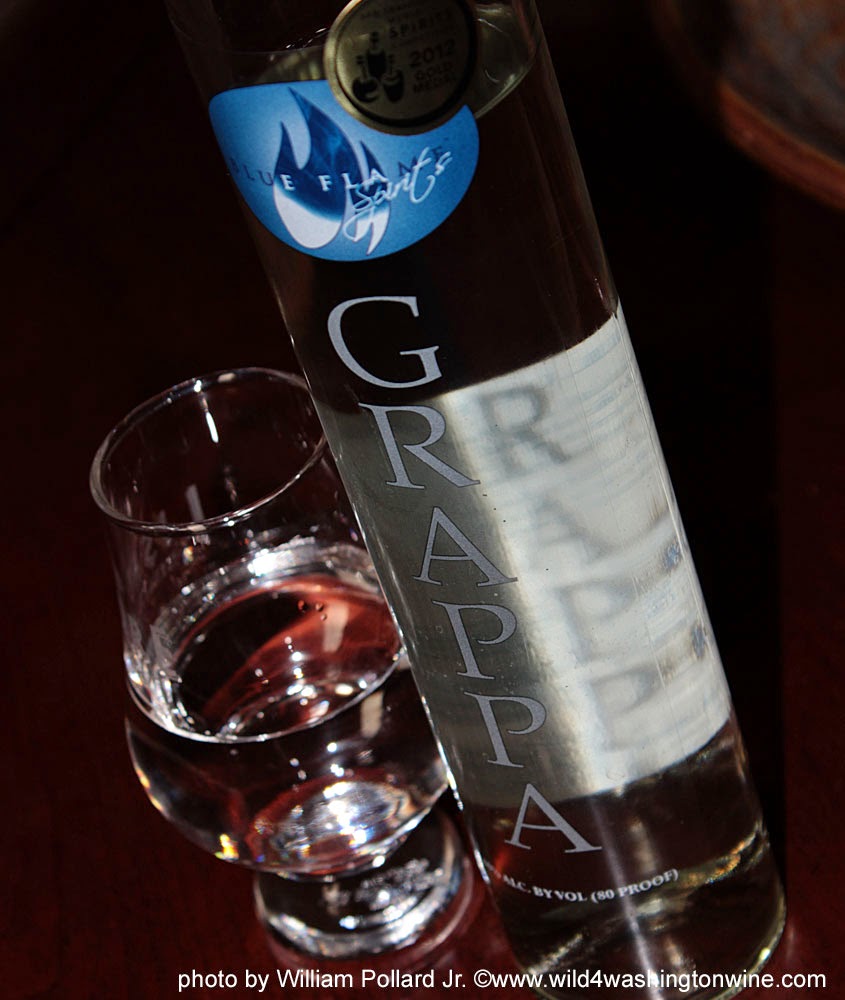 Blue Flame Spirits is a small batch distillery founded in 2009 and located in the small town of Prosser, Washington. They are situated in the Horse Heaven Hills AVA. The numerous vineyards and farmlands surrounding the distillery provides the ideal location for making high quality, hand made spirits using nothing but local ingredients. Every ingredient used is grown within 45 miles of the front door. They support local agriculture and use the highest quality ingredients. I'm all for supporting local local.

Their Grappa won the 2012 San Francisco World Spirits Competition a Gold Medal for it’s category, and their Ultra Premium Vodka won Gold in the 2012 Fifty Best Domestic Vodkas competition. Pretty cool. Brian invited me back to his distillery to watch them make Grappa later in the year. I'll take him up on that offer. Stop by this small distillery the next time you pass through Prosser.