I've mentioned many times on this blog how much I enjoy the quality, diversity, complexity and overall satisfaction delivered by Washington Syrah. Add the Gård 2010 Syrah to the list. This is my first time tasting a wine by Gård Vintners.

Gård Vintners is a family owned and operated winery. "Gård" means "farm" in many Scandinavian languages and is a tribute to the owners Scandinavian heritage and farming tradition.

The Lawrence family, founders of Gård Vintners, have farmed the Royal Slope in Washington's Columbia Valley for over 45 years. Brothers Hervey "Sandy" Lawrence and John Lawrence, along with John's son Josh Lawrence, launched Gård Vintners, a product of Lawrence Cellars, in 2006.

Josh and Lisa Lawrence reside in Royal City with their two daughters and son. Josh is managing partner of Gård Vintners and CFO of Lawrence Enterprises (which includes apple orchards, cherry orchards, Lawrence Vineyards, and a variety of row crops such as wheat, hay and beans). Lisa is the marketing and public relations director for the operation. Lisa contacted me and asked me to review a few of their wines, their 2010 Syrah included.

Color: Dark purple, garnet rim.
Nose: Leather, boysenberry, Orange blossom, cedar, ripe blackberry.
Palate: Spicy, blackberry, medium weight, a touch of heat into the spicy finish. The wine began to open after 30 minutes, heat gone, broader mouth feel and more fruit. After 40 minutes tarragon, chocolate and vanilla appeared on the nose and the tannin began to pleasantly grip my gums. Positive developments. After an hour the nose was still quite aromatic, the mouth feel more luxurious and satisfying, with a significant blackberry finish. Yes, at this point my tongue was stained purple. After an hour and forty minutes this wine began to rock - a meaty quality on the nose, some tar on the palate with a rich texture, gripping tannin and a captivating dark fruit finish - this wine was approaching the seductive. Definite feminine quality after 3 hours - fluid, silky, enticing perfume and palate. All smiles. Thank you Lisa.

Thoughts: At opening this wine was focused more towards aroma than flavor. After 40 minutes the wine became more interesting and expressive. The oak component is a bit stronger than I prefer in a Syrah, but that's me. With some air the fruit became more obvious and up front as the oak moved backstage. This wine will undoubtedly only improve with age. I'd suggest stashing some bottles away for a few years. If you plan on drinking today, I would suggest decanting for 1.5 hours - then enjoy the loveliness that is Washington Syrah. Well done Mr. Morell. Recommended. 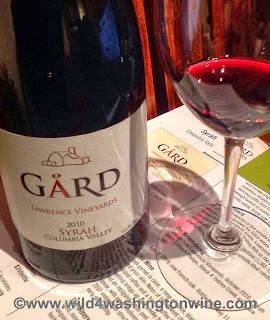 My Thanks to Gård Vintners. I look forward to reviewing more of their wines soon.