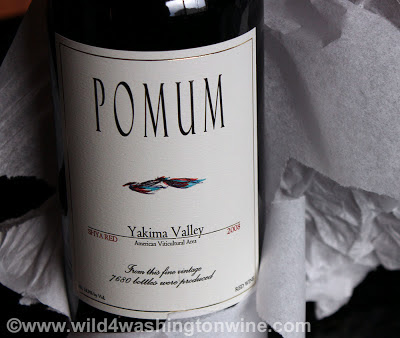 The month of May was a month of Pomum Cellars wines.

It was my sincere pleasure to enjoy three wines sent to me by Woodinville winery Pomum Cellars. I met Pomum Cellars winemaker Javier Alfonso and his wife Shyla in Seattle at the Washington State Wine Awards. He and his wines made a strong impression.

First up was Pomum Cellars 2009 Syrah on May 2nd.
"I was affected by this wine, it brought back passionate memories. I put my nose in the glass again to make sure that intimate essence was still there. It was."

Next was Pomum Cellars 2010 Tinto on May 19th.
"... it had a satisfying fluid quality, similar to premium chocolate which melts the moment you bite it. The nose expanded to aromas of raspberry cordial, tobacco, sage, tarragon and white pepper."

After enjoying two wonderful Pomum Cellars wines, crafted by winemaker Javier Alfonso, my expectations were rather elevated for the Shya Red.

Nose: It was an aromatic wine. Lovely aromas filled the room the moment the cork was pulled. Nose in glass I smelled cherry, chocolate, coffee, pepper, currant and cigar box.

Palate: Up front mostly cherry and chocolate, smooth drinking, tart on the finish with cherry, chocolate and pencil shavings. With some air the wine expanded becoming lush, adding deep cherry and candied tar with fine tannin on the gums. It became juicy and yummy. Recommended.

Javier Alfonso is a truly talented winemaker. I realize now that I drank his wines in order of personal preference; Syrah, Tempranillo and red blend. His wines struck a chord with me. I feel that resonance today, especially after re-reading my previous posts. Yes, I'm impressed. Even though I've never been wine tasting in Woodinville, Washington (hard to believe yet true) I encourage you to visit Pomum Cellars. You will taste how Winemaker Javier Alfonso has delivered on his mission statement, "Crafting Passion in a Bottle."