My frequent readers know that I am partial to Spanish wines, it should be no surprise that I've been looking forward to opening this bottle of Albardiales 2011 Tempranillo from Castilla-La Mancha. This wine was provided by the Castilla-La Mancha US Tour 2013. Thank you.

It was a lovely Spanish wine and it was my first experience with a wine from Castilla-La Mancha. To settle into the proper mood I connected my iPad to the stereo and listened to a Spanish Flamenco playlist on Songza. With Flamenco music playing in the background I proceeded to open the bottle.

Castilla-La Mancha, also known as Castilla la Nueva, is the heartland of Spain. It is a vast, high plateau in big-sky country, with rolling plains and low hills with temperatures that can range from below freezing in winter to a searing 110 degrees Fahrenheit in summer. Sounds a lot like the semi-arid desert where I live in SE Washington.

The five provinces of the region include—Cuenca, Ciudad Real, Albacete, Guadalajara, and the capital Toledo. La Mancha is best known as home of Don Quixote de la Mancha, the main character in the book Don Quixote of La Mancha, a novel by Miguel de Cervantes Saavedra published 1605. Toledo is also the hometown to one of my favorite Spanish painters, El Greco.

The region is world famous for Manchego cheese. Whether soft, creamy, young, semi-cured, or cured, queso manchego is delightfully tangy, growing sharper as it ages. Made exclusively from the milk of manchega ewes, it is aged at least 60 days, often longer, resulting in an aromatic cheese. Quality is strong these days and another favorite of mine.

Wine making in La Mancha dates back to the middle Ages; but is believed to date from the Roman Empire considering their ancient tradition of wine grape growing. The first official recognition from La Mancha as an appellation of origin (DO) dates from 1932, making it one of the oldest DO in Spain. With almost 500,000 acres planted to vines, it is the largest continuous vine-growing area in the world.

DO (DESIGNATION of ORIGIN) La Mancha is the largest wine region in Spain. Traditionally seen only as a high-volume producer of wines, Castilla La Mancha has adapted modern vinification techniques to produce clean, stable wines of superior quality. The Albardiales Tempranillo is testament to the quality of wines from DO La Mancha.

With the music of Gerardo Núñez playing in the background, I began to taste the 2011 Albardiales Tempranillo. 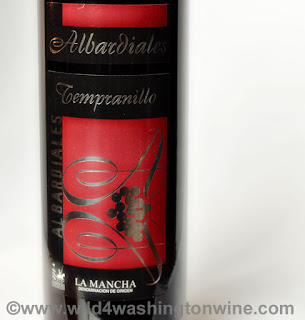 After 30 minutes the nose jumped out of the glass, with intense fruit, blueberry, blackberry, black licorice, coffee, cigar box and spearmint on the nose. An explosion of deep flavors ensued, licorice, blackberry, tobacco with a satisfying firm finish. Delectable, a true treat. Strongly recommended. 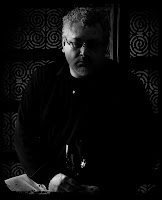 Yes, I thoroughly enjoyed this bottle of Spanish wine. Once again Spain has affected me. There's a significant place in my heart for Spanish wine. Tonight I hope to dream of Spanish windmills, Flamenco music, Manchego, Chuletas de Cordero, old friends and the new Golden Age of Castilla-La Mancha wines.

Add Castilla-La Mancha to my must visit list. Hopefully soon.

Albacete knives: Beautifully crafted knives are made in Albacete southeast of Madrid. They have been in the knife-making business for centuries.

Extra-virgin olive oil: Primarily from the cornicabra olive: Castilla-La Mancha produces nearly 15% of Spain’s olive oil, much of it high-quality extra-virgin. The province of Toledo is particularly noted for its oil.

Sopa de ajo (garlic soup): a traditional peasant soup. Made of garlic (lots of it), bread, and water, often colored with saffron.

Cordero or cabrito asado (roast young lamb or goat): This is the signature regional dish.

Tojunto: A specialty of Ciudad Real, the name means todo junto (“all together”) and refers to the way game, especially wild rabbit, is cooked all together with garlic, onion, green peppers, spices, and a shot of vinegar.

Gachas and migas: Two sturdy peasant preparations: gachas are like polenta, made from cornmeal, wheat, ground lentils, or chickling vetch (rare but fancy chefs like to use this), flavored with ham, garlic, and pimentón (paprika); migas are made from stale bread, coarsely ground or chopped, dampened and then fried, also with the addition of ham, garlic, and sometimes a little fresh chile.

Mazapán (marzipan from Toledo): Arab farmers gave both almonds and sugar cultivation to Spain and possibly Arab cooks combined ground almonds with sugar to make delectable marzipan, but in Toledo it’s the convents where the tradition is kept alive today.