6 Rieslings from the Finger Lakes

Often compared to the wine region of the Rhine in Germany, the area’s lakes create a microclimate, extending summer and limiting the effects of early frost. The lakes and sloping topography also create a macroclimate, which protects the grape vines from the regions frigid winters. The 2010 growing season was the warmest in almost 40 years and the wettest since 1973.

I’m listing these wines in the order in which I tasted them. 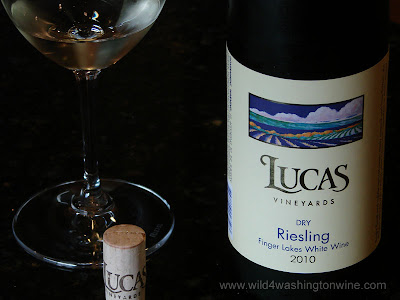 The Riesling from Lucas Vineyards was the first of six bottles I opened. It was pale, with a subdued nose of peach, petrol, and stone pit. It had proper acidity, and grew on me as I sipped it. I enjoyed this wine with Gouda and Cheddar cheeses. The creaminess of the Gouda was a good match for this wine, while the Cheddar emphasized the acidity and the wine seemed livelier. This is a cheese and fruit plate wine; I really need to buy some good crackers to go with my cheese. I liked it. This Riesling has 1% residual sugar. Lucas Vineyards is Cayuga Lake’s oldest winery and is celebrating their 31st anniversary. Lucas Vineyards most known wines are the Tug Boat wines. The nautical wines are named after one of the Founders occupation as a Tug Boat Captain in the New York Harbor. Wine production has risen to 17,000 cases, mostly from estate grown grapes. Today the business is owned and managed by Ruth Lucas. The two Lucas daughters, Ruthie and Stephanie, are employed full time by the winery as is Stephanie's husband, Jeff.
www.lucasvineyards.com 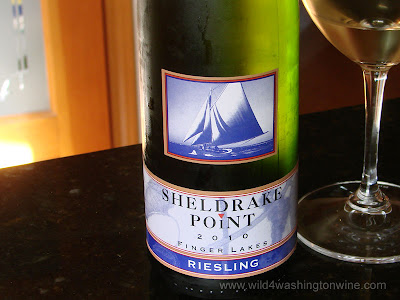 A medium dry wine, it opened to aromas of petroleum jelly and apple. A little air and time and some spiciness emerged. The wine had a pleasant spicy edge with cinnamon in the finish. The Sheldrake Point Riesling was great with the spicy chicken I cooked for dinner. The almost sweetness of this wine and its’ balanced acidity and apple flavors worked very well with spicy food.  At ‎12% alcohol this wine is very drinkable. I enjoyed the nose on this wine. Sheldrake Point Riesling was tasty, off-dry, with just enough fruit and almost sweetness, recommended. Sheldrake Point Winery and their Simply Red Bistro, are located on the shores of Cayuga Lake. You can arrive by boat, bike or car. They are also concerned about gas drilling in the Finger Lakes region, you can learn more about the gas drilling here.
www.sheldrakepoint.com 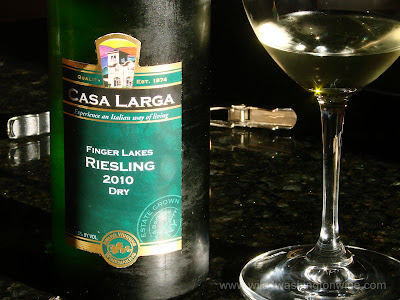 This wine also had an interesting nose. I found this wine crisp, tart, and a bit foxy. With some air, the nose began to change, that foxy/wet fur smell became more akin to ripe apple skin and apple sauce, with a granny smith apple finish, it was refreshingly bright. This wine held up well over several days in the fridge and is still drinking grand. After three days I began to notice tangerine skin on the nose and a honey component in the finish, yummy. With only 11.5% alcohol, I like this wine. For 35 years the Colaruotolo family has been producing award winning wines in the Finger Lakes Wine Region. The Colaruotolo family has carried on founder Andrew Colaruotolo's dream of building a quality vineyard, seeking to not only showcase the wines that can be produced in New York State, but also to remain dedicated to preserving the Italian heritage from which the vineyard has grown. Public winery tours are offered every day. This winery is located just outside of Rochester, NY.
www.casalarga.com 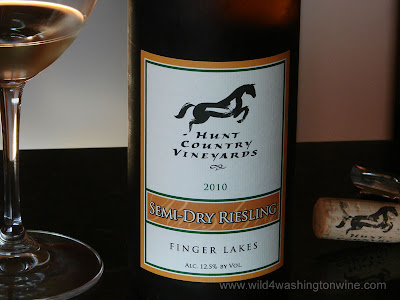 This is a semi-dry wine with 12.5% alcohol. It was spicy, crisp, balanced, with apple and fig. It puts me in mind of a classic Riesling. Tasty, very enjoyable with a good finish, making it a great companion with tonight’s chicken dinner (I made a wine reduction sauce for the chicken from the crispy bits in the pan). This wine would pair well with pork chops too, recommended. Hunt Country Vineyards is a family farm and winery. The farm’s 172 acres have been home to the Hunt family for six generations. With 50 acres of vineyards overlooking the Keuka valley, Hunt Country Vineyards is celebrating their 30th anniversary. When you stop by, don’t miss meeting their winery dogs: Hedy, Molly, Misty and Freddy.
www.huntwines.com 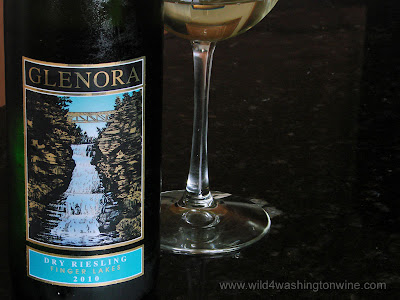 With only 11% alcohol, this wine has a spicy nose with cinnamon, vanilla, and ginger, and a floral note. It was smooth, but tart at the back of the mouth with a subtle pear flavor. I love the nose on this wine, it reminds me of incense, except cool and wet. The flavors are subtle, so I feel this is more of a sipping wine. It would be great as an aperitif, food not required. This is an elegant wine and I seldom consider Riesling as elegant. Love that nose. Steve DiFrancesco is the Winemaker for Glenora Wine Cellars. Steve earned his degree in Biology from Stetson University and has since enjoyed 31 harvests in the Finger Lakes, plus one in Chile. Glenora Wine Cellars offers guided winery tours of vineyards, wine cellar and production facilities. On premise, they have an Inn with views of vineyards and Seneca Lake as well as a Restaurant serving breakfast, lunch and dinner.
www.glenora.com 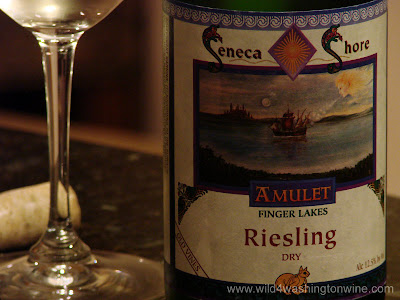 The last Finger Lakes wine I enjoyed was dry, dry, and dry, with mineral, stone, and lemon in the finish. On the nose: vanilla, lemon and paraffin. I found this wine clean and fresh. At 12.5% alcohol, I love the way the acidity blankets the tongue and the flavors of lemon, mineral and wet stone work well together. This is a refreshing wine, which reminds me of a good Sauvignon Blanc. Did I mention that I like it? Recommended.
www.senecawine.com

This was my first tasting of Riesling from the Finger Lakes region of New York. Each of the wines I received was very good and will compliment meals with friends and family. The diversity of styles and flavors was interesting and impressive. Each wine was unique in its presentation in the glass. While I grew up with Washington State Riesling, it has been some time since I enjoyed so many Rieslings. These wines were a real treat and a great introduction to the wines of the Finger Lakes. I enjoyed these wines and hope to have the pleasure of visiting the Finger Lakes; I suggest you do too.