Who is Prosser Vineyard and Winery?

This week I was at the local grocer, once again looking for a bottle of wine to accompany dinner.

My habit is not to buy the wine I know and enjoy, but to seek out the wines I don’t know, and learn more about them. This strategy does not always provide for an enjoyable bottle of wine. Sometimes it does. On display for several weeks, is a wine I did not know, Prosser Vineyard and Winery 2009 Syrah.  Torn between a cool looking bottle of Spanish wine, a local organic Cabernet, and the unknown Prosser Vineyard and Winery Syrah, I pushed past my misgivings about the label (not my favorite design). I decided to take a chance on this bottle of Syrah priced at a reasonable $10.99.

First Washington Wine is a Syrah 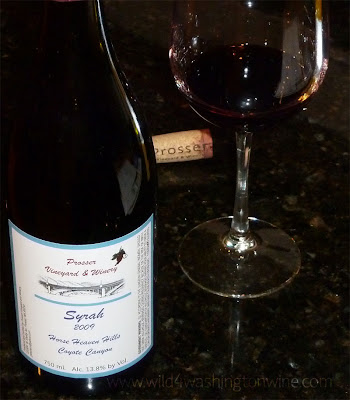 The label on this bottle confused me.
Was this wine made by a vineyard owner, a winery, an organization/club or by the city of Prosser? After some research, I learned that this wine is made by winemaker William Jenkin. William is the former owner and winemaker of the award winning Pamo Valley Vineyard & Winery in Ramona, California. He relocated to Prosser, Washington in 2007. While he has planted Malbec, Bill and his fiancé Lisa Mahoney purchased their Syrah grapes from Coyote Canyon Vineyard, located within the *Horse Heaven Hills AVA.  This, their first vintage, was released early in 2011.

On opening, this wine had a very dusty nose, after some air a distinct aroma of mushrooms, and then nuts emerged. After an hour an undertone of dark fruit laced with violets was present, just under the mushroom. In the mouth the nutty mushroom flavors continued, the wine was a bit funky, as a good Syrah can be (I liked), the fruit flavors became more obvious the longer the wine was open. It had good mouth feel with medium tannins noticeable on the sides of my tongue. This is a very dark wine, so dark it seemed to absorb light. Not the typical Washington Syrah and unlike most I've enjoyed over the last 8 years.

I’d suggest pairing this wine with any dish benefiting from mushrooms: steak, prime rib, venison, leg of lamb, beef stroganoff, meatloaf, you get the idea – this wine is similar to a complimentary sauce.

Day two notes: Most prominent is a stewed plum core, the mushroom is faint, almost a memory.

At $11 the Prosser Vineyard and Winery 2009 Syrah is a very intriguing Syrah. Go grab some and enjoy the journey, marvel at the flavors and reflect on the diversity of Washington State Syrah. Terrific job Mr. Jenkin, I look forward to your future releases. Recommended.