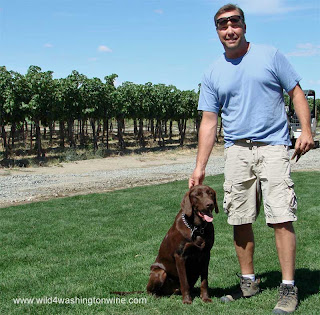 Owner/Winemaker Neil "Coop" Cooper and his dog DB
The reason today for my drive, is that there’s a new winery on Red Mountain – Cooper “A Red Mountain Winery”. The owner/winemaker is Neil “Coop” Cooper. His winery is to open very soon. While Coop did not have time to review his wines today, he did take time for an amiable chat. Thanks Coop. 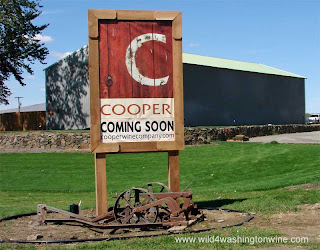 Cooper Winery is now the first winery you see when you turn onto Red Mountain’s Sunset Road. Traces of the previous winery have been carefully removed. Coop has worked hard on getting his winery ready for visitors – the exterior of his facility is due to be painted soon. Soon enough for his Grand Opening on September 11th.

While we were visiting today, Coop invited me and all my wine friends (that’s you too) to join him on Saturday 11 September, 3pm until 9pm for his Grand Opening. The Grand Opening will be at the winery, 35306 North Sunset Road (that’s at the base of Red Mountain). You’re invited, so come on over, bring some friends; I know I’ll be there. The local band Café Blanco will be performing, Coop will provide hors d’oeuvres, and he’ll have specials on his wines. This will be a good opportunity to join his Wine Club too.

Focusing primarily on Bordeaux style wines, I counted 8 red wines and 3 white wines. Prices range from $20 - $55 per bottle. I had the opportunity to sample his wines two months ago at the Walla Walla Wine Bloggers Conference – good stuff.

Hope you are able to stop by for his Grand Opening – it’s sure to be a lot of fun.