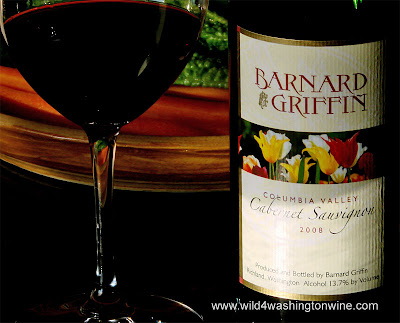 I've mentioned before that I've been a fan of Barnard Griffin wines since 1997. So, I was not surprised that I enjoyed this wine. But, don’t expect a monster Cabernet out of this bottle, it’s more dignified than brutish. I found the 2008 Cabernet to be quite smooth and bright, with cherry, vanilla, pepper and some smokiness, very tasty for a medium bodied wine. Drink it with or without food. It's plenty bright, so pairing with grilled meats is suggested. It's very drinkable today and should hold up in the cellar for the next handful of years (go buy a case now while prices are reduced).

The 2008 Cabernet has had good reviews and it won Best in Show at the Washington Wine Competition.

Rob Griffin has another winner in his portfolio of Tulip Labeled wines. Distribution on this wine is good, so you may be able to find it locally. If not, please contact the winery directly at: http://www.barnardgriffin.com/

You can thank me later.