Yesterday, owner Jeff Gordon, daughter Katie Nelson and winemaker Tim Henley took time off from their busy schedules to visit with me and tour the Gordon Brothers Estate Vineyards and winery. Tim and I barrel and tank sampled through 2008 and 2009, Chardonnay, Merlot, Syrah, Tempranillo, Cabernet Sauvignon, 2009 Kamiak White and the 2007 Tradition (gorgeousness).

Gordon Brothers has been producing outstanding wines since 1985. They share the privilege of being among the earliest, eminent Washington wineries. My first visit to the Gordon Brothers winery was about 20 years ago. Back then, there was a small tasting room adjacent to the family home. While the tasting room is now located in Woodinville, Washington, as always, the fruit is grown and the wine is made, on their property overlooking the Snake River and Levy Park. 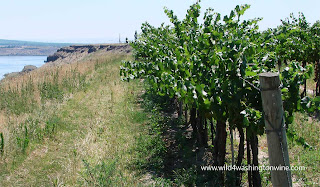 These vines are not afraid of heights
Gordon Brothers winemaker, Tim Henley, was my genial guide as we toured the 100 acres of estate vineyards. The vineyards hug basalt cliffs above the Snake River and border fields of Gordon Brothers other crops; cherries, sweet corn and melon. Tim is originally from California, he and his family moved to Washington just four years ago to make wine in Washington State. After three hours visiting with Tim, it’s obvious to me that he enjoys working with Gordon Brothers’ fruit and is captivated by Washington. 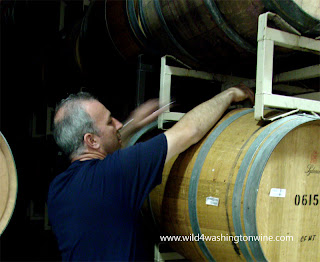 WinemakerTim Henley pulling some 2009 Merlot to taste
Gordon Brothers also has newer plantings of a Cabernet Sauvignon clone named “Clone 6”. The Clone 6 vines produce more open clusters of grapes, providing extra sun exposure – the vines are located on the rocky south east hillside and receive a lot of sun and wind. The wine made from the Clone 6 fruit is bottled but not yet released, it is called “2008 SIX” Cabernet Sauvignon. It was my pleasure to sample the 2008 SIX. While there are those who don’t believe Washington State wineries can produce long lived wines, suitable for the cellar – the 2008 SIX my friends is a wine to collect and is perfectly suited for your cellar or wine fridge. It’s in a very pretty bottle, perfect for showing off. 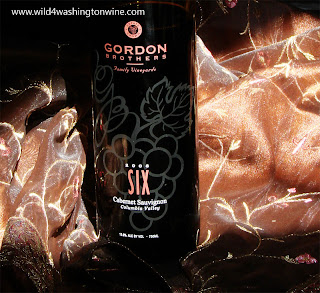 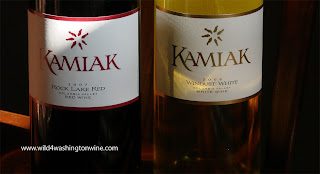 What else did I learn? Gordon Brothers has a second label called “Kamiak”. The Kamiak label is obviously a way to sell wines that don’t fit with the Gordon Brothers original label. That’s to our benefit, because these quality wines are priced lower and intended for a different audience. The 2007 Kamiak Rock Lake Red is a blend of Cabernet Sauvignon, Merlot and Syrah the 2008 Kamiak Windust White is a blend of Chardonnay, Sauvignon Blanc and Gewürztraminer. Katie sent me home with a bottle of each, so I’m looking forward to reviewing these wines soon – I’m thinking summer barbecue with friends. Thank you Katie. 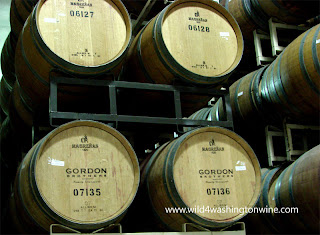 Barrels of 2009 Syrah, lovely stuff in those barrels
Some of the memorable barrel samples include; 2009 Reserve Chardonnay, 2008 Merlot, 2007 Tradition, and the 2008 Tempranillo. Surprisingly, I even enjoyed the barrel samples of Syrah Tim shared with me. His Syrah ranged from fruity to funky. As much as I liked the fruity Syrah, the funky one in the last barrel we sampled truly intrigued. Tim still has to sort out which barrels and which blends these wines will go into from the cellar. That’s his job and he’s the right man for that job. He’s obviously an asset to the Gordon Brothers family. 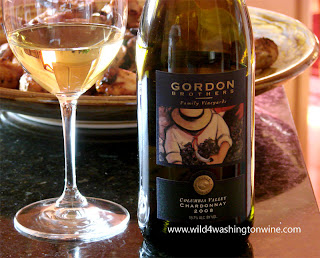 I had time to pair the Gordon Brothers 2008 Chardonnay with grilled chicken (lemon juice, oregano, garlic). When I served the chicken, it needed some fresh lime juice, salt and hot sauce, then it became the perfect pairing. This Chardonnay is quite crisp, almost tart, minimal oak does not interfere with the fruit and really enhances the enjoyment of the chicken. 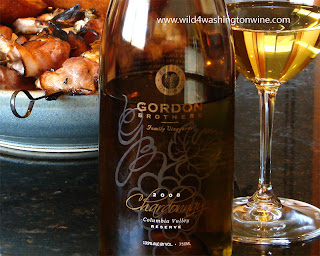 Today, I was able to pair Gordon Brothers 2008 Reserve Chardonnay with bacon wrapped wild prawns. Loved this pairing; the smoky-sweetness of the bacon and prawns work so well with this toasty nosed, buttery-rich, Chardonnay and the acidity in the wine is just right for cutting through the bacon fat – simply scrumptious.