Wake Me Up Walla Walla
Two years working for a winery instilled a lot of confidence in my palate. Not that I did not enjoy wine before then, it just confirmed for me that I know what I like and I like good wine. At least that is, until last year. Last year I lived in a Muslim country, with minimal access to wine. So what could a Washington wine drinker do, when he can’t personally purchase Washington wine, or any wine?

Making Do Without Wine
Interestingly, I became fascinated by Middle Eastern perfumes and incense (Bakhoor). The range of styles and exotic aromas fascinated my Western senses (see my post on UAE perfumes here). After returning to Washington State, I noticed that my focus on perfume and incense had a negative effect on my wine appreciation. Syrah, once my go to, drink any day varietal, just no longer toots my horn. In general, I find Syrah too acidic to appreciate. Sadly, my enthusiasm for wine also became rather subdued. Difficult to believe, I know.

Should I be Concerned?
Honestly, I was a bit worried that my wine hobby was winding down. Fortunately, last month’s visit to Walla Walla shook me up.

Walla Walla Astonished
Walla Walla is located 55 miles from where I live in South Eastern Washington. I’ve been visiting the small community of Walla Walla for the last 24 years. Mind you, the number of wineries in Walla Walla has exploded in the last 10 years. Sure I’ve been wine tasting there, sure I have my favorite go to Walla Walla wines. But Walla Walla specifically, as a wine region? No, never been a big Walla Walla wine enthusiast. 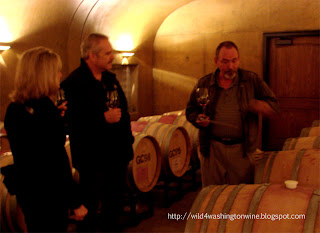 Tours of the winery are by appointment only. So call ahead. Lucky for me, Ed Luebben designed this winery and is friends with Dave. The first order of business was a trip down into the cozy wine caves. There we tasted the Garrison Creek 2009 Zinfandel from barrel. Did you just read that? Garrison Creek Cellars is making Zinfandel wine, from their Zinfandel vineyards in Walla Walla. Young in the barrel and already it drinks like a decadent wine - spicy cinnamon and complex layers of flavor, with a finish I couldn’t help but marvel at - so much going on in the mouth. Dave likes to give his wines extra years of aging in barrel and then extra years in the bottle (he just released the 2004 Cabernet Sauvignon last month). So don’t expect to find the 2009 Garrison Creek Cellars Zinfandel any time soon. Dave said he’ll release the wine, when the wine is ready.

Impressed Awake
Though I have not had the pleasure of meeting Mr. Murr, Mr. March impressed me. His winemaking passion is contagious. I first thought Dave a bit eccentric; the time I spent with him convinced me of his genius and talents. While they grow a lot of fruit at Garrison Creek Cellars, they only keep the best 5% for their wines. Sampling the elegant wines Dave crafted, I fell under his spell, his genius of expression spell – and then, unexpectedly…my palate woke up. Dave March of Garrison Creek Cellars got my wine appreciation juices flowing again. This guy knows what he’s doing and he won’t let anyone influence his style or approach. Bravo – I’m now a fan! 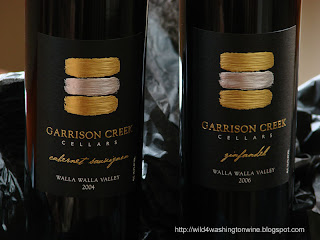 If you’ve never heard of Garrison Creek Cellars, it’s because this is a newer Walla Walla winery with annual production under 1000 cases. Also, when Michael Murr originally attempted to build his winery, there were some concerns from the community, which delayed its construction by five years. I won’t go into detail about the delay, but you can read about it on the “Wild Walla Walla Wine Woman blog here”.

Great Facility
About the facility, the design of the winery was inspired by a 100 year old barn a few miles away. My friend, Architect, Ed Luebben, is the one who realized this inspiration. Viewing the winery from the eastern edge of the Les Collines vineyard, I was impressed by how well the barn motif fits into its environment. 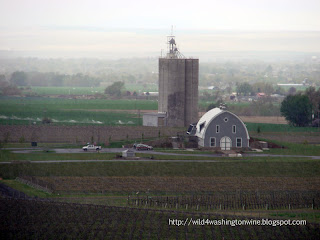 From a distance, it looks like a real barn surrounded by vineyards – it does not look like the world-class winery it is. The more I look at this facility in its environs, the more I appreciate the intent of the client and the expression of the architect in achieving something special. Kudos! 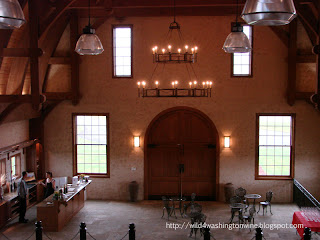 Interior view from the balcony.

Check out their Web site, buy some of their wine and go visit the winery when the opportunity arises. You won’t be disappointed. Possibly you will leave astonished and under the spell of Garrison Creek Cellars.