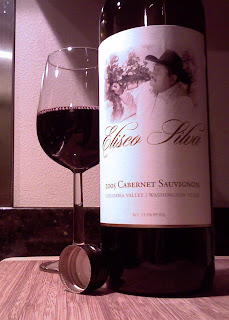 When I broke the seal on the screw cap, there was an instant aroma of dark fruit, jammy, and blueberry on the nose. Immediately appealing. On my first taste, I got gobs of fruit in the mouth, with a dry and tart blueberry finish, not a monster finish, but very pleasant.

Two hours later, now there's a whiff of dark earth and candied fruit, reminds me of those cherry suckers dentists always used to have (red was my favorite when I was a kid) and there's a hint of tar residue. I like how the wine has changed. The fruit now rolls around on the back of my tongue and tickles my ears. Tasty.

This wine sure puts me in mind of a Syrah blend. As I already noted, it's tasty.

This is my second Eliseo Silva wine. Last year, I enjoyed the Eliseo Silva 2005 Syrah. The 2005 Cabernet Sauvignon is just as good.

My advice is go cook up some steaks or burgers and crack open some Eliseo Silva 2005 Cabernet - it's ready to drink now. If you crank it open early, you can save it for a late night by the fireplace (four hours later I'm getting a little licorice on the finish - tasty). On day two, this wine was at least as good as on day one, maybe even better. Go find out on your own.

Purchased this wine locally on sale for $7.99!

This has to be the best Washington wine value available, except for the Eliseo Silva 2005 Syrah, which is also amazing, awesome, fantastic and wonderful. You can tell I like them both.