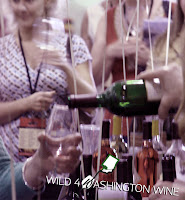 Living in Washington Wine Country Since 1986.
In 1986 I discovered that wine was being crafted in Washington State. Almost in my backyard. I had moved from the green, wet, west-side of Washington, to the southeast corner. The semi-arid desert part of the Evergreen State. Yes, there is a desert in Washington. With not much to do in town then, I began to take notice of the local wineries.

Learning to Appreciate Washington Wine
Naturally, when I first began drinking wine, I started with the sweeter wines like Riesling, which used to be labeled "Johanisberg Riesling." Some of my first wine experiences were at local wineries. I recall some fun barbecues at Preston Wines in Pasco, live Mariachi music at the Hogue Winery in Prosser and tasting Bookwalter wines in a small sheet metal building next to the Pasco truck stop. Kiona Winery was still making and serving wine from the basement of their home - there were some great barrel tastings.

My first red wine "aha" moment was in 1992 at Birchfield Manor in Yakima. The wine was a L'Ecole No. 41 Merlot. The waiter took us down to the wine cellar and suggested it for dinner. What a great suggestion. My wife and I have been fans ever since. And my palate started to lean towards red wine.

Washington Wine Today
It is all very different today. Bill Preston passed away in 2001, the Hogue winery is now owned by Vincor USA, which has become the second largest producer of wine in Washington (500,000+ cases produced annually), Kiona has a lovely new winery/tasting room with a gorgeous view and Bookwalter winery has a fancy Wine Bar in Richland, where you can listen to live music into the evening - recommended. With about 700 bonded wineries in the State, you can go wine tasting almost anywhere.

Also, I was fortunate to work for one of my favorite local winemakers, Rob Griffin, at the Barnard Griffin Winery from 2005 - 2007. Rob moved to Washington in 1977. He was the first winemaker for Preston Wines. Then he worked for Hogue wines from 1983 until 1991. In 1992 Rob and his wife Deborah decided to go it alone and began working full-time on Barnard Griffin wines - a label they created in 1983.

Biased Because I Live Here
Am I biased towards Washington wines? Of course, I live here. If you have yet to travel over to this part of the world, then you my friends are missing out. So read on and hopefully you'll get the itch to stop by and have your taste buds pleased by Washington wines.